Hungry and thirsty, some 1,300 people from the Northeast, travelling by a special train from Haryana, were already a harried lot.

GUWAHATI/PATNA: Hungry and thirsty, some 1,300 people from the Northeast, travelling by a special train from Haryana, were already a harried lot. The train had left Gurugram on Friday and the last meal they had was on Saturday at around 7 pm. When the train halted at Danapur near Patna in Bihar on Sunday morning, scores of people tried to barge into it, leading to an argument with passengers. When stopped from boarding the Dimapur-bound train, the unruly mob threw stones at the train. Some youth from the Northeast alleged that they were even beaten up by the local policemen.

The passengers — mostly young men and women — did not allow people to board the train at Danapur in view of the Covid fear. This infuriated the people who attacked the train with sticks and stones, smashing windows of the coaches.In videos of the incident, the passengers were heard pleading with the assailants but to no avail. An attacker was heard threatening to burn down the train. Northeast Frontier Railway’s  chief PRO Subhanan Chanda said, “The matter was discussed with East Central Railway officials. There was a minor issue but was handled by RPF and GRP staff. The train is being escorted by RPF. It’s moving ahead.”Robin Hibu, an IPS officer from Arunachal based in Delhi, said he had discussed the matter with his batchmate Kundan Krishnan who is Additional DGP, Bihar. 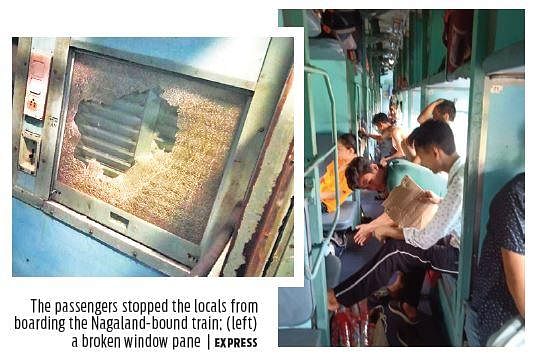 According to chief spokesperson of ECR, Rajesh Kumar, there were some passengers who had arrived earlier by a Shramik Special train and were waiting at Danapur for onwards journey to their homes in Katihar and  Khagaria. On seeing that berths getting vacant after about 150 passengers deboarded at Danapur, the district authorities tried to accommodate some of the waiting passengers in the Shramik Special to which the passengers on board objected.

Girl dies on Board

A girl from Dimapur district, who was apparently suffering from some liver ailment, died in the train. Iraheu, a friend of the deceased who was travelling by the same train, said the body was retrieved at Kanpur. After medical examinations, it was being taken to Nagaland in an ambulance by Iraheu and another youth from the state. “I worked with her in Himachal. Ahead of the lockdown, we moved to my elder sister’s place in Gurugram and got stranded,” Iraheu said.

Stay up to date on all the latest Nation news with The New Indian Express App. Download now
TAGS
migrants stone pelting