Worry about citizens, not airlines: SC pulls up government on middle seat bookings

The court questioned why the government deemed social distancing norms was not necessary on flights when it has insisted on maintaining six-feet distance elsewhere.

NEW DELHI: The Supreme Court on Monday pulled up the Centre and the DGCA for allowing booking of middle seats on flights and said the government should worry more about the health of citizens than the health of commercial airlines. 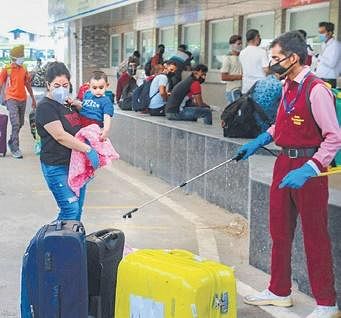 A bench headed by Chief Justice of India S A Bobde ordered Air India not to take advance bookings for the centre seats on international flights being run for Indians stranded abroad for the time being. The court questioned why the government deemed social distancing norms was not necessary on flights when it has insisted on maintaining six-feet distance elsewhere.

“Shoulder to shoulder seating is dangerous and against the government’s own norms,” the bench told Solicitor General Tushar Mehta, who was appearing for both DGCA and Air India. However, Mehta argued that keeping the middle seats vacant served no purpose as the flights have air circulation, and said the best practice advised by medical and aviation experts was increased testing and quarantine, and not middle seat difference.

But the bench responded, “Outside, there should be a social distancing of at least six feet, and inside you’re eliminating even middle seat difference. How can you say it will not affect anyone? Will the virus know it’s in the aircraft and it’s not supposed to infect?.”

Appeal against order
The observation came while hearing an appeal filed by DGCA and Air India against an interim order passed by the Bombay HC, which had directed Air India to run while keeping the middle seat vacant on international flights.

Stay up to date on all the latest Nation news with The New Indian Express App. Download now
TAGS
middle seat bookings