RAGHOPUR(VAISHALI): “We sell milk, not our mind,” says Ramesh Yadav, as he hires a boat to cross a stretch of the Ganga. “Politics reaches here directly from Patna,” he adds sardonically. The Raghopur Assembly is represented by Tejashwi Yadav, the RJD leader and Grand Alliance’s chief ministerial face. Tejashwi is pitted against BJP’s Satish Kumar Singh.

Situated between two streams of the Ganges; Raghopur is a river island. It is connected to the state capital, some 10 km away, by a Pipa bridge. Every year the area gets submerged by floodwater that also brings a new layer of soil making the area fertile. A six-lane bridge across the Ganga from Patna to Bidupur touching at Raghopur midway is being built.

The constituency has over 1.5 lakh Yadav voters followed by nearly 40,000 Rajputs and 20,000 Paswans and 19,000 Muslims. Earlier, voters were angry with Tejashwi who had seldom visited Raghopur since his election in 2015. But they are now warming to him as a future chief minister. “He didn’t come here when we were facing the flash flood. But Raghopur will not vote for an MLA, but for the chief minister”, says Munna Kumar, a youth.

Satish Kumar Singh is also an influential Yadav candidate. He had defeated Tejashwi’s mother Rabri Devi in 2010 on JD-U ticket. Rabri Devi had won the seat in 2005 while her husband Lalu Prasad Yadav had been elected from the seat in 1995 and 2000. “Tejashwi’s promise of 10 lakh jobs has struck a chord among the youth. Otherwise, people were angry with him,” says Rajeshwar Rai, who runs a cowshed. 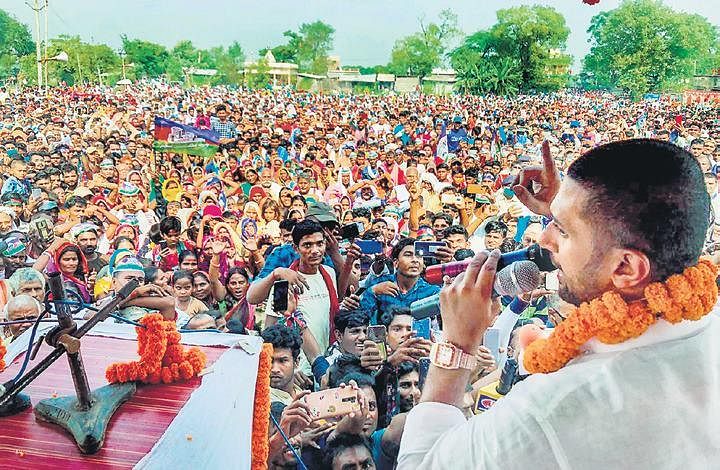 On October 26, addressing an election rally, Yadav said that the voters of Raghopur will not vote for an MLA but for the CM this time. “Tejashwi has transformed the people’s anger into hope,” says Punit Paswan, a daily wager. But Akhilesh Singh, a Rajput, says the people would not be misled by Tejashwi’s rhetoric. “He remembers us only when the election comes”. Singh says the BJP candidate is more educated and a son of the soil.

Recently, RJD chief Lalu Prasad’s trusted aide and Raghopur’s influential leader Narayan Rai alias Bhola Rai quit the party after he was not nominated as an MLC. “Bhola Babu’s exit will not have much impact. Bhola Babu never cared for us,” says Mahesh Yadav, a farmer at Paharpur village. Rakesh Raushan, an engineer and LJP candidate, has also queered the pitch for Tejashwi a little.Mohhamad Tariq, who runs a footwear shop in Patna, says Tejashwi represents the less privileged of Raghopur in VIP politics.

“We are known by the fact that Tejashawi is our MLA. His parents gave us political significance”, says Tariq. “He is Raghopur’s rajdulara (favourite son) and will get support to become the CM,” he said. When asked about education, health, electricity and road facilities, most people didn’t sound interested. “Dhire dhire sab ho raha hai aur Raghopur se CM bante aur hoga (everything is taking place gradually and more would be done when Tejashwi becomes CM)”.