At under 1% of the US population, Indian-Americans don’t count for much in the country’s November 3 presidential elections.

NEW DELHI:  At under 1% of the US population, Indian-Americans don’t count for much in the country’s November 3 presidential elections. But which way they will swing in eight key battleground states — Arizona, Florida, Georgia, Michigan, Minnesota, North Carolina, Pennsylvania and Wisconsin — could impact the final outcome, as these states collectively hold 24% of electoral college votes (see box).

The candidate who gets at least 270 electoral college votes wins the jackpot, not the one who bags the highest popular votes, as the 2016 experience showed. Needless to say, every vote counts in swing states. Unlike in the rest of the US, these swing states are not clearly Democrat- or Republican-leaning, so Indian-Americans could possibly play a marginal yet decisive role there.

The prosperous Indian-American community is so thinly spread out in the 50 US states that in almost all of them, they number less than 0.5% of the average population. But in the swing states, their numbers are better. According to the 2010 US Census, Indian-Americans make up 0.66% of the population on an average in the swing states with Georgia having the highest, 0.99%, and Wisconsin the lowest, 0.4%.

“Indian Americans make up only 0.82% of the eligible voters, which is not much. But they are significant for a few reasons. First, because of their presence in swing states like Pennsylvania, Michigan and Wisconsin,” said Kriti Upadhyaya, a researcher at the Washington-based Centre for Strategic and International Studies.

Citing her institute’s tally, she said the Indian-American population is 1,56,000, 1,25,000 and 37,000 respectively in these three states.“In these states where the 2016 victory was achieved through rather narrow margins, each vote counts and the Indian Americans make up a vote bank that can make or break a candidate’s chances of victory,” she added. 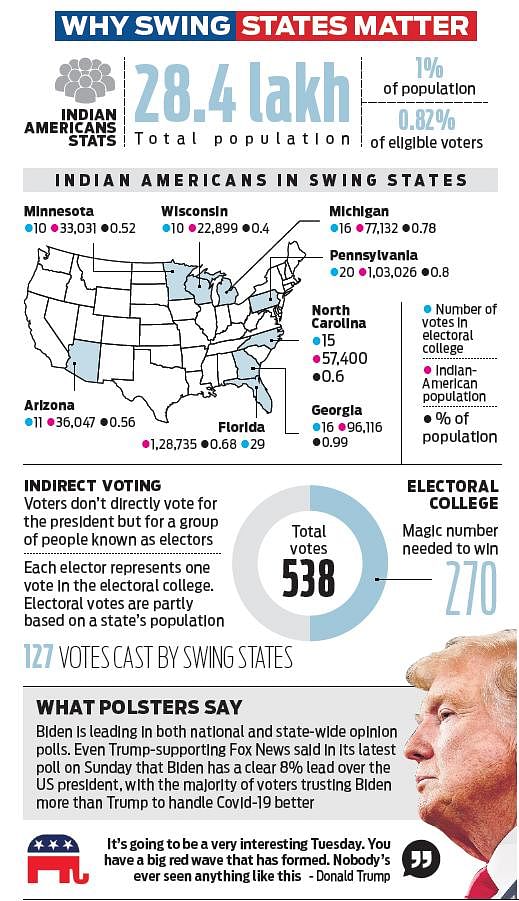 Influence of Indian Americans outdo their population in US elections

The electoral college has 538 votes and the magic number for a presidential win is 270. The swing states have 127 electoral college votes and any candidate winning these states has a clear edge. In 2016, Trump won at least four of the swing states with narrow margins. Since Indian-Americans are the most educated among immigrants and naturalised citizens, their opinions have the potential to influence others within their circle.

“The community is the highest-earning and educated ethnic group in the country, with a median income of $100,000 in 2015, nearly double the national average that year, making them attractive to both parties,” Indo- US relations expert Harinder Sekhon said. A researcher at the Indian Council for World Affairs said that being educated and affluent, members of the community hold some important positions and though their numbers are not signficant, their opinions are taken seriously. In terms of voting patterns, the community is known to lean towards the Democrats.

But, since 2016 studies indicate that some of them may have shifted towards the Republicans because of the Trump administration’s tax breaks. There are also equally credible studies pointing that the Indian- Americans are staying loyal to their Democratic leanings. “As Indian-American voters increase rapidly in terms of population in the US and given their affluence, one expects them to become only a more important vote bank with time,” Upadhyaya said.

Now we are on Telegram too. Follow us for updates
TAGS
US Presidential polls US elections 2020 Indian-Americans donald trump