Bypolls: Advantage BJP in MP, test of Yogi’s popularity in UP

In Uttar Pradesh, the result of the seven assembly seats could potentially be seen as a mini-referendum on the performance of the three-and-a-half-year-old Yogi Adityanath government.

BHOPAL/LUCKNOW: The November 3 by-elections to 35 seats in the Hindi heartland – 28 in Madhya Pradesh and seven in Uttar Pradesh – are crucial for the BJP as these will test the popularity of its two chief ministers, Shivraj Singh Chouhan and Yogi Adiyanath.

In Madhya Pradesh, the real test is of Jyotiraditya Scindia, who led 22 of his loyalist MLAs to the BJP camp in March this year, throwing out the Kamal Nath-led Congress government and necessitating the by-elections.

As many as 17 seats lie in the Gwalior-Chambal region, considered Scindia’s stronghold. Out of the remaining 11 seats, two are in central MP, two in Bundelkhand region, four in Malwa region, two in Nimar and one in Mahakoshal region.

The BJP needs to win only nine seats to have a majority of its own in the 230-member MP Assembly. For the Congress, with 87 seats, the by-election victory would only mean a morale booster.The fate of 12 Madhya Pradesh ministers is at stake. Ten of them are Scindia loyalists.

As many as 23 ministers – all BJP candidates – had ended up as losers in the 2013 and 2018 assembly polls.The BJP is apprehensive of sabotage. Out of the 28 assembly by-polls, 25 have been necessitated by resignation of former Congress MLAs, while three fell vacant due to the death of sitting MLAs.

In Uttar Pradesh, the result of the seven assembly seats could potentially be seen as a mini-referendum on the performance of the three-and-a-half-year-old Yogi Adityanath government.

The seats where the by-elections are due are Ghatampur, Malhani, Bangarmau, Deoria Naugaon Sadat, Bulandshahr and Tundla. In the 2017 elections, the BJP had won six. Malhani in Jaunpur was the exception.

The BJP pressed into action its entire cadre with Chief Minister Yogi Adityanath holding back-to-back rallies across the seven constituencies. However, no prominent leader from the three main opposition parties — SP, BSP and Congress — participated in the by-poll campaign.

Analysts say the Samajwadi Party is banking on the consolidation of the Muslim votes, especially after BSP chief Mayawati last week declared she would support even the BJP to ensure the defeat of SP in Vidhan Parishad elections due in January. 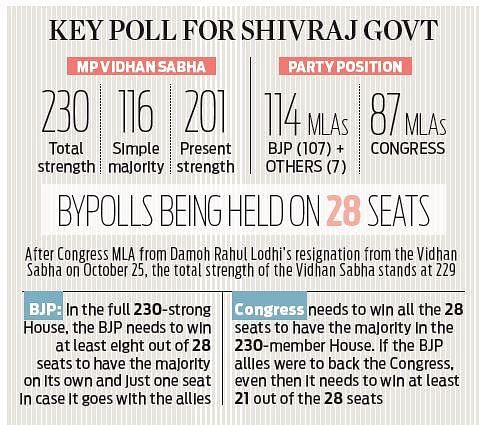 Now we are on Telegram too. Follow us for updates
TAGS
byelections Yogi government UP government MP government BJP congress