NEW DELHI:  Farmers, fishermen and livestock rearers have received monetary benefits worth Rs 50,000 crore in the last five years from the National Monsoon Mission (NMM) run by the Ministry of Earth Sciences (MoES), as it helped farmers at various levels — from ensuring early or delayed sowing and better fodder management, according to a report launched on Tuesday.

“For every rupee spent by the government on the NMM and High-Performance Computing (HPC) programmes of the MoES, the country would gain economic benefits worth Rs 50, which is 50 times more benefit on the investment over the next five years period,” said a report by the National Council of Applied Economic Research (NCAER), an independent, not-for-profit, economic policy research and think tank.

The report launched by Union minister Harsh Vardhan refers to economic benefits as direct monetary gains to crop farmers, livestock rearers, and fishermen in the country. According to the report, India’s investment of nearly Rs 1,000 crore in the NMM and HPC facilities would provide benefits worth Rs 50,000 crore to nearly 1.07 crore below poverty line (BPL) agricultural households and 53 lakh BPL fisher-folk households in the country. 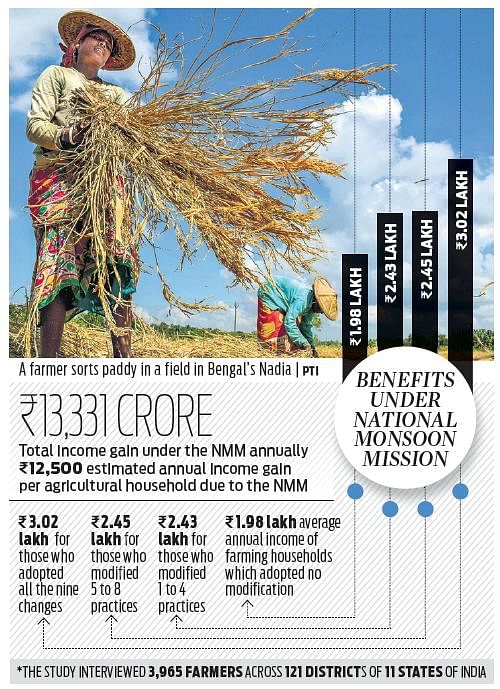 One-fourth of the beneficiaries were women as with an estimated proportion of women among farmers, livestock rearing and fisher-folk to be  26.9 per cent,  48.5 per cent and  4.9 per cent,  respectively,  the estimated benefits realised by the women workers works out to be  Rs 13,447 crore, which is 26.6 per cent of the total benefit.

The NCAER study was based on a face-to-face survey of 6,098 respondents, including 3,965 crop farmers, 757 marine fishermen, and 1,376 livestock owners. Along with this, responses from 2 lakh farmers were also collected through an interactive voice response system to validate the findings of the face-to-face survey. The mission was launched in 2012 to develop a dynamic monsoon prediction system for short, medium, and long-range forecasts.

Now we are on Telegram too. Follow us for updates
TAGS
Monsoon plan farm sector