Kerala would be able to flatten the Covid-19 curve if the daily tally of new cases keeps coming down, said Kerala Health Minister K K Shailaja.

Kerala would be able to flatten the Covid-19 curve if the daily tally of new cases keeps coming down, said Kerala Health Minister K K Shailaja. Leader of Opposition Ramesh Chennithala, however, said the government turned Covid control into a publicity exercise, and this in turn led to slackening of vigil against the pandemic. They were speaking to Prabhu Chawla, Editorial Director, The New Indian Express, and senior journalist Kaveree Bamzai, during TNIE Expressions, a series of live webcasts with prominent people. 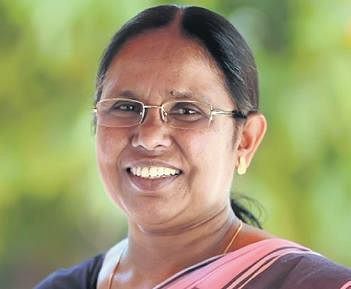 Shailaja vouched for the success of the Kerala model in dealing with the pandemic despite the state moving from being one of the best in the world to one that contributes 15 per cent of the daily cases in the country. According to her, Kerala, despite being vulnerable to the pandemic in terms of its demographic and epidemiological factors, has done well in controlling Covid-19 deaths. “The death rate was at a peak of 0.7% in May when the lockdown was lifted. It has come down to 0.34% in November due to the planning and execution of the Kerala model,” said Shailaja.

The minister, who received wide international media coverage during the initial days of the pandemic, said the world was watching the performance of the state. “Our aim was to keep cases under the threshold of our health system. That is a more scientific thing,” she said. Asked about the increase in transmission rate after the initial success, Shailaja said the influx of expatriates after the lockdown was lifted and the lack of vigil among them led to an increase in local transmission.

Chennithala, however, alleged that the tall claims made by the government led to slackening of vigil and resulted in a second wave. “Pandemic should not have been turned into a PR exercise. We projected that we are number one. That gave a message to the people that the pandemic was over and there was slackness everywhere.” According to him the state should have had a better success as it has the best health facilities, on a par with the European nations.

He blamed the government for not conducting enough tests which would have helped save lives. “There were not enough facilities for the Gulf returnees as promised by the government. The lack of preparedness was evident in first-line treatment centres and we are now facing a third wave,” he said. The minister, in turn, blamed the opposition parties for holding protests against the government in violation of the Covid-19 protocol and contributing to the spread of cases.

“The protest gatherings affected the state very badly. As many as 500 policemen were infected and so were some of the protestors and their families,” she said. Chennithala justified the protests saying the people were agitated against the government over the sensational gold smuggling issue. “At some point, we stopped the protests and adhered to the protocol. But eight ministers contracted Covid. Was it because we staged agitations?” he asked.

Now we are on Telegram too. Follow us for updates
TAGS
TNIE expressions k Shailaja Coronavirus Kerala model