Poll results decoded: Owaisi’s party did not eat into Mahagathbandhan votes in Bihar

The party, which contested the Bihar polls in alliance with the BSP and the Upendra Kushwaha-led RLSP, was accused of being the B-team of the BJP.

NEW DELHI: Despite the All India Masjid-e-Ittehadul Muslimeen (AIMIM) winning five seats in the Bihar elections, the number of winning candidates from the community has come down by five. While 2015 saw the election of 24 Muslim candidates, 2020 gave the Bihar Assembly only 19. 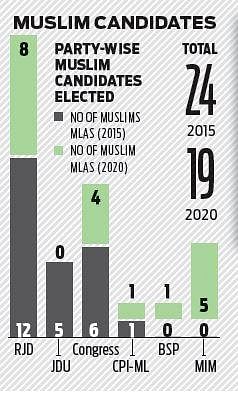 In terms of parties, the RJD had the highest number of Muslim MLAs with eight, followed by the AIMIM with five.

The Congress had four Muslim legislators while the Communist Party of India- Marxist Leninist (CPI-ML) had one. Even the BSP lone MLA is Muslim.

Interestingly, contrary to popular opinion, the AIMIM has not cut into the votes of the Mahagathbandhan.

The Asaduddin Owaisi-led party, which contested the Bihar polls in alliance with the BSP and the Upendra Kushwaha-led Rashtriya Lok Samata Party (RLSP), was accused of being the B-team of the BJP.

In the 20 seats that the AIMIM has contested, it won five. In the remaining 15 seats, the party has not garnered so many votes so as to be proven as detrimental for the RJD or the Congress.

In all the 15 seats, the combine of the runner up and MIM vote share was not larger than the winner’s showing that even if they had contested in alliance, the results of the constituencies would not have differed.

Now we are on Telegram too. Follow us for updates
TAGS
All India Masjid-e-Ittehadul Muslimeen AIMIM Bihar Elections 2020 Bihar Polls 2020