NEW DELHI: A random analysis of foreign contributions to over 600 shelter homes in the South has revealed that they received funding up to Rs 6 lakh per child per year, much of which may not have been spent on kids at all.

The analysis and a report based drafted by the National Commission for Protection of Child Rights (NCPCR), has been sent to the Union Women and Child Development Ministry for further action.

They cumulatively received over Rs 409.5 crore as contributions from abroad in 2018-19 as per their own declaration under the Foreign Contribution Regulation Act. 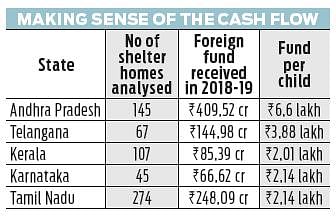 “This works out to Rs 6.6 lakh per child per year but obviously most of it is not being spent on children,” a senior NCPCR functionary said.

“This is a serious issue that needs to be flagged and thoroughly investigated as social audit has revealed that inmates are struggling for even basic facilities in most shelter homes in Andhra and are even vulnerable to abuse.”

In Telangana, annual foreign funding received per child was Rs 3.88 lakh while it was in the Rs 2 lakh-plus range in Karnataka, Tamil Nadu and Kerala (see table).

“Regarding funding related matters a random analysis/exercise was carried out with some of the NGOs audited during social audit in southern India to understand the trend about foreign funding,” the report states.

The per child annual spend in government-run shelters, including recurring expenses, is just Rs 60,000, the report adds.

The exercise came close on the heels of the commission flagging the unusually high number of children in shelter homes in eight states and directing that  they be sent back to their “permanent homes”.

Now we are on Telegram too. Follow us for updates
TAGS
NCPCR Children Shelter Homes Union Women and Child Development Ministry