DEHRADUN: Despite the Uttarakhand government’s efforts, migration from the hill districts towards the plains and to other states continues. The latest revision in the voters’ list points to this disturbing trend.

Shekhar Pathak, a Padma Shri awardee activist, said, “The data is indicative of the fact that migration from the nine hill districts of Uttarakhand has not stopped." 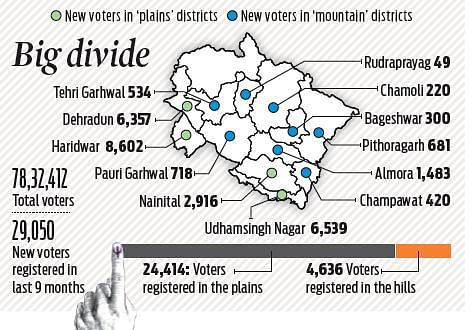 "More efforts are needed to check migration from our hills.”

Among the nine hill districts, except for Almora, the number of voters did not reach four digits in any of the districts while it was only 49 in Rudraprayag.

The data by State Rural Development and Migration Commission, set up by Chief Minister Trivendra Singh Rawat, points out a positive growth rate in the population of districts in the plains such as Dehradun, Udham Singh Nagar, Nainital and Haridwar while in the mountain districts like Pauri, Almora, Tehri, Chamoli, Rudraprayag and Pithoragarh, there has been a decline.

Uttarakhand has around 16,500 villages, of which 734 have become ‘ghost villages’ with zero population.

Now we are on Telegram too. Follow us for updates
TAGS
Migration