The highest number of people, 95, have been killed in North India while South India has seen least deaths.

NEW DELHI:  At least 193 people have died during illegal sand mining operations across India from January 2019 to November 15, 2020, according to a report collated by a network of organisations working on rivers.

The data by South Asia Network on Dams, Rivers and People shows that in this period, 23 farmers and villagers; 5 reporters and activists and 11 government officials, including forest guards, policemen, revenue officials, mining personnel and district officials have been killed by illegal miners.

The highest number of people, 95, have been killed in North India while South India has seen least deaths.

Bhim Singh Rawat, who compiled the report, says the actual numbers could be way higher as many cases are not reported or cases are registered under different sections.

The data is based on various sources like studies, media and field reports and government websites. 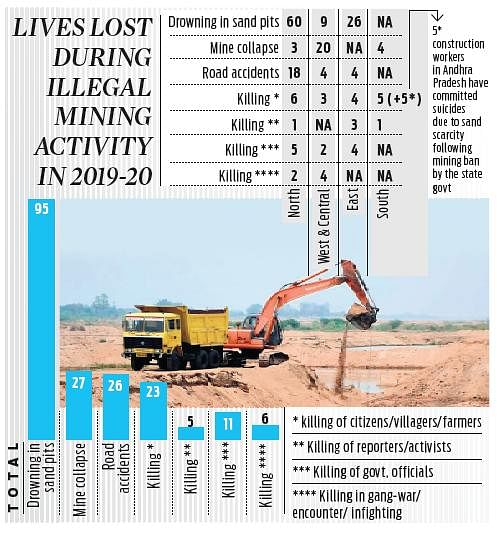 Accidents, however, are the bigger killers with drowning, mine collapse and road mishaps being top contributors.

Of the total deaths, 95 were caused by drowning in deep sand mining pits followed by 27 caused by collapse of sand mounds and caving in of sand mines.

These deaths totaling 148 (about 76%) are indirectly attributed to excessive, unscientific riverbed mining and transportation of sand. Of the 26 road accidents deaths, 18 (69%) took place in just three states — Uttar Pradesh (12), Haryana and Uttarakhand (3 each).

Out of 95 drowning deaths, 76 (80%) were of either minors or young children or teenagers who entered river to have a bath, unaware of deep pits in the riverbed.

One reporter in UP, two activists in Odisha, one in Bihar and one in Tamil Nadu were killed for opposing and exposing illegal sand mining.

There have been brutal attacks on one reporter each in Uttarakhand, Chhattisgarh and one RTI activist in Kerala.

A total 84 incidents of threats and attacks on citizens, reporters, activists and government officials have been reported.

The number of injured in the attacks, especially on villagers and on police, forest guard, revenue and mining departments teams is even higher.

Now we are on Telegram too. Follow us for updates
TAGS
illegal sand mining South Asia Network on Dams Rivers and People