The turnout was an improvement from the 2019 Lok Sabha elections, when 45% voters exercised their franchise.

SRINAGAR: Braving cold and the Covid-19 threat, 51.7% voters in Jammu and Kashmir cast their vote in the first phase of the eight-phase District Development Council elections, the first electoral exercise in J&K after the scrapping of Article 370 and its bifurcation on August 5 last year.

The turnout was an improvement from the 2019 Lok Sabha elections, when 45% voters exercised their franchise. The improvement was more marked in the Kashmir Valley, where the turnout was 40.65%. In the general elections it was only 18.8%.

A first-time voter Zubaida, who cast her vote in Nochimalla Makhdoom Mohalla (B) polling station in the Harwan area in the outskirts of Srinagar, said the vote makes a difference. “I am voting to get issues of my mohalla resolved. We want development in our area. We want so many issues… we want healthcare centre and I hope our votes will lead to development of our area”.

She said she wants her children to have all the facilities that exist in main towns and cities and “unlike other elections, in BDC polls we can hold our representatives accountable”. Mohammad Shafi said their vote was against the BJP. “We are voting against the BJP and we hope that the representatives and parties whom we vote in the DDC polls will be able to get back what was snatched from us on August 5 last year.”  Abdul Samad, an elderly voter, said this election was for development of the area and not for political purposes. 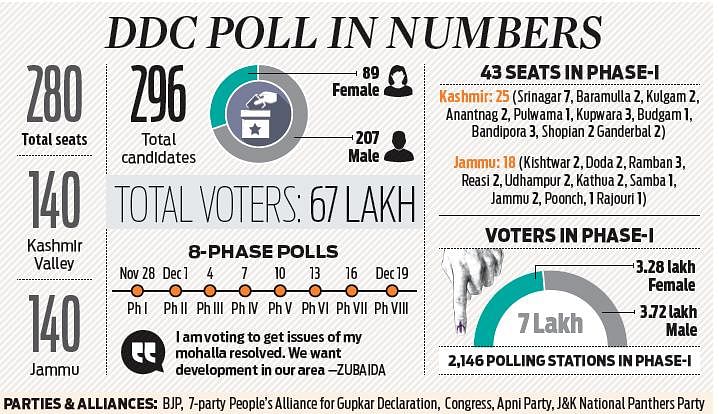 “The advisors and officials are not accessible to us. We are facing a lot of problems and there is nobody whom we can approach. Now when we elect our representative, he/she will be accessible to us and we can go to the person anytime to press for development of the area.

We want health centres for people and sports infrastructure for youth,” Samad said. Javed Ahmad, a youth, said not only development but they were voting for peace also. “Since last year, there is fear among the people and we want to end this fear. We also want development and jobs.

If the developmental activities take place and pick up, it will generate more jobs and provide livelihood to many,” he said. Mohammad Shafi, 75, said not voting was a sin and “I don’t want to commit a sin.” “I have been exercising right to franchise no matter whether political leaders have kept their promises or not. I am again voting this time with a hope that the representative whom we elect resolves our issues and problems,” he said.

“We are poor people and for us Article 370 or its revocation hardly matters,” he added. But a young girl who had completed her graduation said their vote was against Article 370’s revocation. “Our jobs have been snatched after Article 370. We used to have SC/ST quota jobs in J&K. But after Article 370 revocation the state subject law has been abolished and now we have to compete at all India level, which is not possible for us,” she said.