From 2G, Aarushi Talwar to Babri demolition: CBI failed to give proof in many high-profile cases

NEW DELHI:  With a Special CBI Court on Wednesday acquitting 32 accused, including BJP leaders LK Advani, MM Joshi and Uma Bharti, in the Babri Masjid demolition case, the agency’s conviction rate is a parameter that can be looked at. 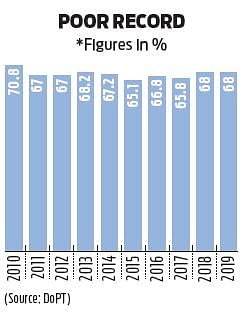 According to official data, the Central Bureau of Investigation’s (CBI) conviction has declined from almost 71 per cent in 2010 to 68 per cent in 2019.

Also, the agency has failed to achieve convictions in many high profile cases such as the 2G scam, the illegal mining scam of Karnataka and the Aarushi Talwar murder mystery.

“In many cases, the CBI forms a correct theory about the crime committed but fails to achieve convictions as they find it difficult to prove it in the court. Most theories are formulated with the help of circumstantial evidence, which is not enough to achieve conviction in court,” a senior lawyer said.

Another lawyer said the sheer amount of time that the agency takes leads to fewer convictions.

“In most cases, the agency is handed over the probe after another agency has already probed the case. Like what happened in the Aarushi Talwar case, the evidence is damaged or destroyed by that time. Hence, it becomes very difficult for the CBI to prove the guilt of the accused,” she said.

In terms of percentage, the agency saw a consistent drop in conviction rate from 2010 to 2012.