There is also a possibility of shortage of coal in the coming days, which will affect power generation.

CHANDIGARH: While the Congress government is Punjab is fully backing the farmers’ protest against the three farm laws enacted by the Centre, it’s now in a fix as the agitation has hit the supplies of essentials to and from the state and is hurting the economy. 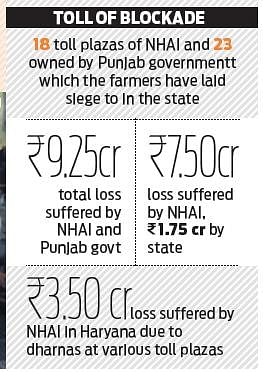 Non-lifting of 10 lakh metric tons (MTs) of foodgrains, severe shortage of fertilizers and non-supply of gunny bags, which might affect the transportation of paddy, are some of the problems the state government is already grappling with. There is also a possibility of shortage of coal in the coming days, which will affect power generation.

“In the last nine days, around 10 lakh MT foodgrains (wheat and rice) could not be dispatched under the central pool as the farmers have stopped the trains. This, in turn, will lead to storage problems in the coming days as the stocks will pile up,” Punjab Food and Civil Supplies Minister Bharat Bhushan Ashu told this newspaper.

In September, approximately 15 lakh MT foodgrains were transported by rail rakes to other states. Expressing concern over the depleting fertilizer stock, Ashu said, “As of now only 10-15 per cent of the fertilizer stock is left.

The availability of urea is 1.7 lakh MTs against the required 13.5 lakh MT.” There is also shortage of jute bags, which is hampering paddy procurement and transportation, he said. While 560 containers of jute bags arriving from West Bengal are stuck in Delhi due to the rail blockade, another 160 containers started today from Kolkata. 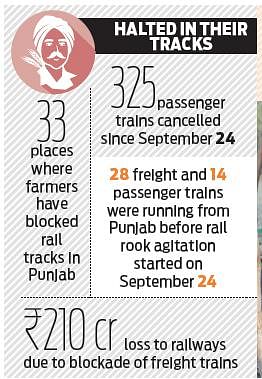 The minister urged the farmers to at least allow goods trains to start so that movement of foodgrains and other essentials items can resume. An official of Punjab State Power Corporation Limited said, “As of now, the thermal plants in the state have a stock ranging from 1 to 6 days.

At present the corporation is not running its thermal plants as it is getting electricity at cheap rates from other states and also from private thermal plants within the state.’’ The blockade at toll plazas is saving the money of commuters but has dented the earnings of the National Highways Authority of India and the Punjab government as no one is paying tax on the 41 total plazas, causing a daily loss of around `1.15 crore to the state.

Now we are on Telegram too. Follow us for updates
TAGS
farm stir