With the gradual re-opening of the economy, the number of air passengers has witnessed continuous growth.

NEW DELHI:  With the gradual re-opening of the economy, the number of air passengers has witnessed continuous growth. The number grew by nearly 43 per cent between June and August, while aircraft movement has recorded a growth of nearly 28 per cent.

However, there was still an average gap of nearly 76% in the movement of passengers and 64% gap in aircraft movements in August this year compared to the same month last year, domestic air traffic data from the Directorate General of Civil Aviation and Airport Authority of India revealed.

Smaller cities like Patna, Lucknow, Kozhikode, Jaipur, Coimbatore etc. have seen larger growth in aircraft movements in last three months —from 1,148 to 1,676 in Patna, 111 to 202 in Kozhikode and from 860 to 1,288 in Lucknow between June and August.

While the government believes that domestic traffic is likely to reach pre-COVID level by the year-end, industry analysts say the recovery is only marginal.

Harsh Vardhan, aviation expert and former CEO of Vayudoot, said while the recovery is a good sign, it may take till end of 2022 for the aviation sector to return to last year’s levels. “Almost 60-70% fleet is still on the ground. I don’t see anything before 24 months when reasonable operations are stablised...There are restrictions. There is very limited international operation,” he said. 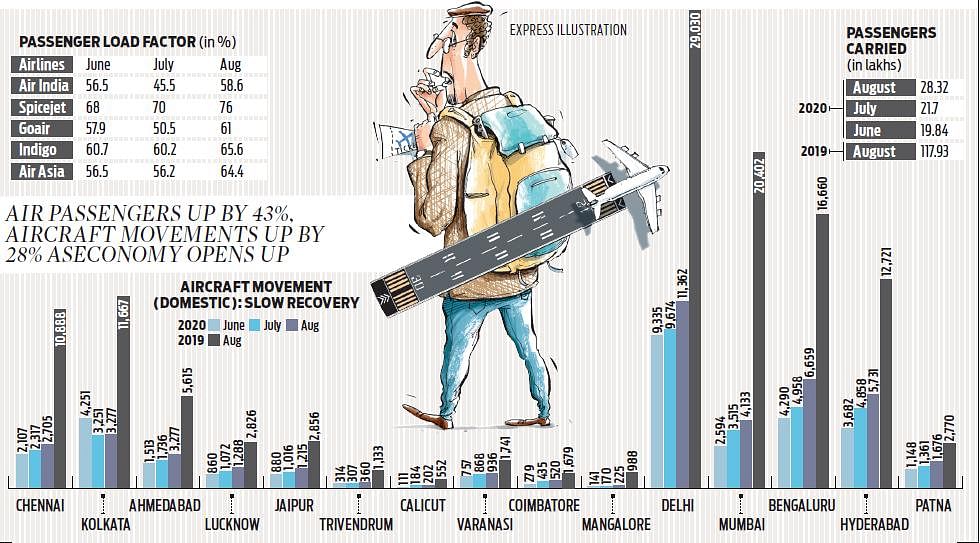 “You have to also realise that what you have lost in last 10 months has created a big hole... the problem of the airline industry is how to get over these crises.”

Kinjal Shah, Vice President, ICRA, informed that the average number of passengers per flight in September this year was 98 against an average of 133 in September 2019.

“It is expected that the domestic aviation industry operated at a passenger load factor of about 63% in the month as against 85.5% last year,” he said.

Earlier this week, Civil Aviation Minister Hardeep Puri said he expected the number of daily air passengers to rise to 2,00,000 by October-end, while pre-COVID figures of 3,00,000 passengers per day could be reached between Diwali and New Year.

Aviation secretary Pradeep Singh Kharola said, “We are now gearing up to face the challenge of welcoming more people in the airports.”

Now we are on Telegram too. Follow us for updates
TAGS
Indian Airlines Airport Authority of India

It's official! Vijay Sethupathi won't be a part of Muttiah Muralitharan biopic