Senior military officers believe in last few years, India has not only augmented its military infrastructure, but also improved deployments in the area.

NEW DELHI: China’s continued provocations and aggressions along the LAC in eastern Ladakh is part of Beijing’s game plan to restrict India militarily to the region and at the same time, raise the economic costs for it to defend the frontiers, according to defence experts.

“This movement will require us to base a large number of our troops and equipment in the sector which will lead to a massive cost on the economy,” said Brigadier (retd) Rupinder Dhillon. Even if the stalemate at one point is resolved, China will open a new front at some other place, he warned.

There are other factors, too, playing in the in the mind of the Chinese establishment. Senior military officers believe in last few years, India has not only augmented its military infrastructure, but also improved deployments in the area, giving us a capability to react faster and more effectively.

India has activated Fukche, Nyoma and Daulat Beg Oldi airstrips in addition to those at Leh, Thois and Kargil.

Additionally, an independent mountain brigade and an armoured brigade have been raised for the area and plans are in mature stages for a large aviation formation to be raised, confirmed Lt-Gen Chaturvedi.

The government has also been taking hard decisions in the last few years.

‘Salami slicing’ and nibbling at Indian territory has been China’s tactics along the LAC since long. But this is changing and that’s what China is working to offset, said experts.

The Chinese are testing our resolve. Their operation on the night of August 29-30 was a bid to occupy heights in Chushul area on the southern bank of Pangong Lake which would have given them advantageous position.

“We occupied the heights; had it been vice-versa, they would have been able to look deeper into our areas. Also, it would have given them the opportunity to consolidate in those areas in future.” 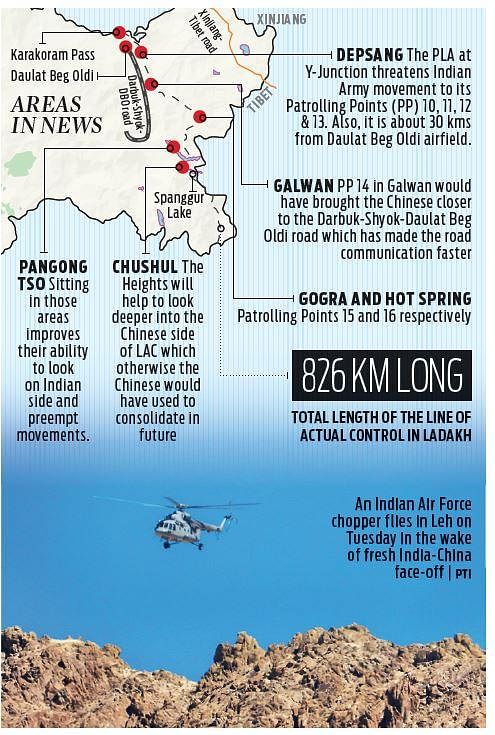 Now we are on Telegram too. Follow us for updates
TAGS
Line of Actual Control PLA Indian Army Ladakh Standoff India-China Border Standoff