Unacademy helps people to prepare for 35 major competitive exams through 18000 educators and has over 3.5 lakh subscribers on its YouTube channel.

Jaipur youngsters turn billionaires through online education
Two young friends from Jaipur through their success in the IT industry are now the ‘Pride of the Pink City.’ Gaurav Munjal and his friend Roman Saini had set up ‘Unacademy’, an online education platform barely five years ago, which is now in the top 200 Indian companies with an estimated worth of Rs 11,000 cr. ‘Unacademy’ is now the sixth largest company for online education in the world. Gaurav, a B Tech in Computer Engineering, had left his high-paying job, and so did Roman, an MBBS who quit IAS,  to set up ‘Unacademy’. When PM Modi had invited youngsters to come up with fresh Start Up ideas, the two friends were among those who had applied. Today, Unacademy helps people to prepare for 35 major competitive exams through 18000 educators and has over 3.5 lakh subscribers on its YouTube channel. 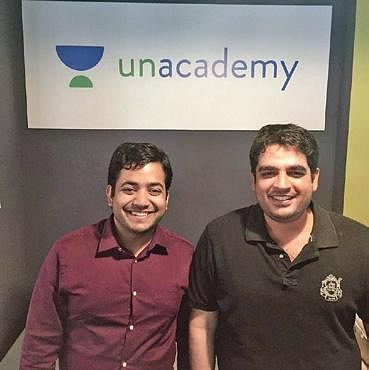 BJP leaders compete on Twitter to greet Modi
PM Modi’s birthday on September 17 became an occasion for leaders from Rajasthan to reach out and convey good wishes on his 70th birthday. Besides Congress leaders like  Ashok Gehlot and Sachin Pilot, the occasion led to a virtual competition among BJP leaders to greet Modi on Twitter. Former CM Vasundhara Raje was lavish in her greetings. Her major competitor in Rajasthan, Union Minister Gajendra Singh Shekhawat, was no less profuse in his praise. “Heartiest wishes to our beloved PM @narendramodi  ji on his birthday. Sir, you have inspired millions with your sheer hardwork, preservance, determination, dedication & commitment,” he tweeted. Not to be left behind, BJP state president Satish Poonia put out five tweets.

Dark humour on corona
The MPs who tested Covid positive ahead of the Parliament’s monsoon session got sympathy. But Sukhbir Singh Jaunapuria, the BJP MP from Tonk-Sawai Modhopur, became the cause of ridicule. Jaunapuria had trotted out bizarre prescriptions to build immunity against Covid-19. In a video posted on Facebook, Jaunapuria was seen blowing a conch and frolicking in the mud in underwear. He had claimed that munching on leaves and using mud packs can save people from coronavirus. “Blowing a conch makes our lungs stronger,” he had quipped. Needless to say that the MP is completely silent.

Salman to appear in court on Sept 28
Bollywood superstar Salman Khan has been summoned by the Jodhpur district and sessions court in Jodhpur on September 28 in connection with hunting of black buck and possession of arms. He had earlier appealed for an amnesty given the corona crisis which was accepted, but not anymore. The 22-year old case pertains to the shooting of his film ‘Hum Saath Saath Hai’ in Jodhpur in October 1998 when Salman was accused of hunting black bucks and chinkara deer on the outskirts of Jodhpur. The actor was reportedly gearing up to start work again on TV series Bigg Boss14 and his upcoming movie Radhe, but now all are on standby after the court orders.