Utilisation of funds under scheme for minority welfare has declined sharply in last 5 years.

NEW DELHI:  Uttar Pradesh government has not used most of the funds received from the Centre for development of minorities. According to government data, the Yogi Adityanath government utilised just about 10 per cent of over Rs 162 crore released under the Pradhan Mantri Jan Vikas Karyakram (PMJVK) scheme in 2019-2020.

Union Minority Affairs Minister Mukhtar Abbas Naqvi shared the figures in the Lok Sabha while responding to questions posed by BSP leader Danish Ali on the issue of funds allocation for welfare of minorities in Uttar Pradesh.

The figures also revealed that the fund utilisation has declined sharply between 2015 and 2019 from about Rs 202 crore to about Rs 16.20 crore. The utilisation of funds released under PMJVK has been declining consistently over the last five years. 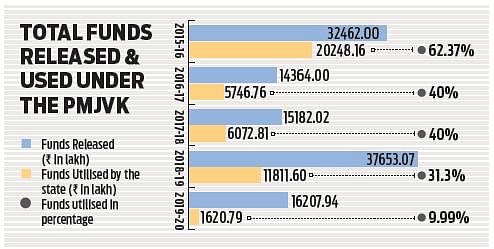 During 2020-21, an amount of Rs 45.52 crore has been released to the state of Uttar Pradesh as on August 31, the minister said. Leaders of minority communities alleged bias of the state government against a section of the society. Kamal Farooqui, former chairperson of the Delhi Minorities Commission, said that Yogi Adityanath has forgotten that he is not just a politician but also the state chief minister and that he has responsibilities towards everyone in the state.

“As the chief minister, he is not supposed to be biased against one section of the society. But his handling of various issues have shown his bias,” he said. Farooqui, who is also part of the All India Muslim Personal Law Board, added that UP has seen all kinds of human rights violations. “Yogi Adityanath’s actions have been communal. His actions and this data shows that he is not capable of handling the government in an unbiased way,” Farooqui said.

In Parliament, Naqvi said that the ministry is implementing various schemes/programmes in the country for welfare and development of six centrally notified minorities. Naqvi said that funds through the PMJVK had been utilised for building additional classrooms, anganwadi centres, hospitals, sanitation and potable water projects. He added that during the last five years, the government’s total expenditure for implementation of PMJVK in the country was Rs 6255.53 crore.

Now we are on Telegram too. Follow us for updates
TAGS
Uttar Pradesh minorities minorities funds