Outside Parliament, Prime Minister Narendra Modi sought to dispel concerns among a section of farmers, saying he wanted to make it clear that the bills are not against agriculture mandis.

The suspended MPs — Derek O’Brien, Dola Sen (all TMC), Rajeev Satav, Syed Nassir Hussain, Ripun Bora (all Congress), Sanjay Singh (AAP), Elamaram Kareem and K K Ragesh (both CPM) — called the action autocratic and continued sitting in the House despite repeated requests by the chair to leave, leading to multiple adjournments. No legislative business could be conducted throughout the day.

Holding placards saying ‘Murder of Democracy’ and ‘We will fight for farmers’, the suspended MPs later began an indefinite dharna near Gandhi statue on Parliament’s premises. The Upper House is likely to witness uproar on Tuesday, too, as the Opposition plans to press on with its objections to the refusal to allow division on the farm bills.

Parallelly, the Opposition sought time to meet President Ramnath Kovind while urging him not to give assent to the two bills passed by the Rajya Sabha on Sunday — the Farmers’ Produce Trade and Commerce (Promotion and Facilitation) Bill 2020 and the Farmers (Empowerment and Protection) Agreement of Price Assurance and Farm Services Bill, 2020. They also weighed options to take the matter to the judiciary.

Outside Parliament, Prime Minister Narendra Modi sought to dispel concerns among a section of farmers, saying he wanted to make it clear that the bills are not against agriculture mandis. If somebody says that government-regulated agriculture markets will be finished after these reforms, then he is “blatantly lying”, Modi asserted.

Earlier in the day, Naidu called Sunday a bad day for the Rajya Sabha. “It pained me a lot because what happened yesterday in the House is unfortunate, unacceptable and condemnable,” he said and recalled that some members were seen “climbing on the Secretary General’s table, dancing, shouting in the well, tearing papers, breaking the mikes, obstructing Deputy Chairman from his duties, throwing papers, Rule Book on Deputy Chairman”.

The Deputy Chairman was physically threatened, he added. As the Deputy Chairman had stated, if the members had remained seated, voting would have been carried out, Naidu claimed. “Certainly, the conduct of some members grossly crossed all barriers of all parliamentary decorum.” On the no-confidence motion moved by the Opposition against Harivansh, Naidu said it was not in proper format as it did not give a 14-day notice as prescribed.

Need of 21st century: PM
Prime Minister Narendra Modi on Monday asserted that the farm sector reform bills were the need of the 21st century India, saying farmers will now have the freedom to sell their produce at a place and price of their choice. He also assured farmers that the government will purchase of their produce and the minimum support price (MSP) mechanism will continue 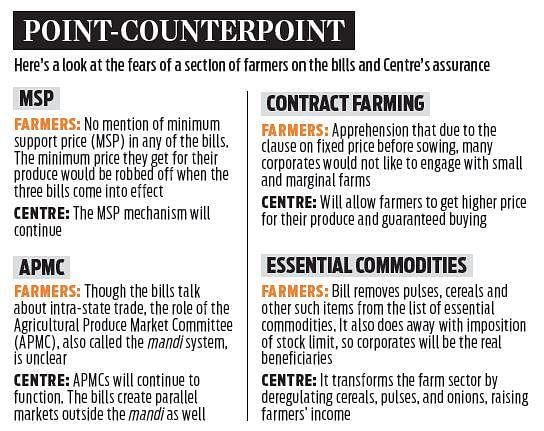 Now we are on Telegram too. Follow us for updates
TAGS
Rajya Sabha MPs suspended