Decline in Covid-19 cases, but experts flag concern over lesser number of tests

Over the past week, India conducted fewer tests as compared to the previous mark giving an impression that this “decline” is an effort to keep the daily case count in check.

NEW DELHI: Over the last seven days India, for the first time since the beginning of the Covid-19 pandemic, reported a fewer number of coronavirus cases than the previous week giving rise to the speculations that the pandemic may be past its peak in the country. However, over the past week, India also conducted fewer tests to diagnose the cases as compared to the previous mark.

It gives an impression that this “decline” is an effort to keep the daily case count, rather than the actual spread of the infectious disease, in check. Between September 21 and 15, there were a cumulative 6,32,437 fresh Covid-19 cases detected in the country, as compared to the period between September 14 and 8 when 6,49,814 new cases were registered-marking a decline of about 2.6%. 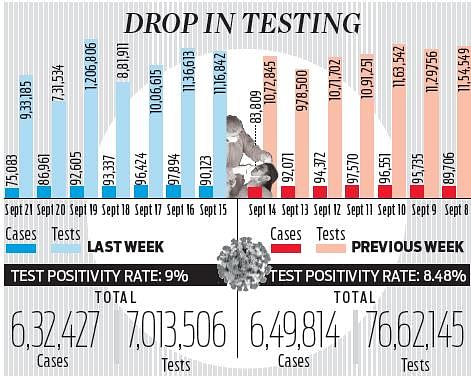 But in these two weeks, there was also a difference between the number of tests conducted and in percentage terms, this was about 8.4% lesser over the last seven days as compared to the previous weeks (see box). In a press briefing on Covid-19 outbreak management on Tuesday,

Union health secretary Rajesh Bhushan dismissed the concerns that states are testing less. But experts say it’s the decline in the number of tests carried out over the past week that explains the reduction in detected cases as the average daily test positivity rate is still around 9.3% and increasing.

“The country should be increasing the number of daily tests instead of lowering it at a time when the tests positive rates are well above 5,” said health economist Dr Rijo M John. He added: “Reduced tests would be leading to an increasing number of undetected case.” Epidemiologist Dr P K Tyagi also said: “Test positivity rate is rather increasing as a result of which more serious cases will be admitted and more mortality will take place.” Public health researcher Oommen C Kurian said “the time to track case numbers is long over, we should just focus on deaths.”

Now we are on Telegram too. Follow us for updates
TAGS
coronavirus covid covid test