An internal report of the Army says an average of one incident takes place every week. These accidents led to the death of 27 soldiers in 6 years  and injuries to 146 others.

NEW DELHI:  The Army not only lost soldiers due to faulty ammunition but also faced loss of ammunition and money.

An internal report of the Army says an average of one incident takes place every week. These accidents led to the death of 27 soldiers in 6 years  and injuries to 146 others.

“The poor quality of production is leading to accidents every year with an average of one accident every week.

This year 13 soldiers have been injured in such accidents. As per the report, the financial loss has been to the tune of Rs 960 crore.

The Army had to destroy such faulty ammunition valued at Rs 658.58 crore even when these ammunitions still had a shelf life. In May 2016, there was a blast in anti-tank mines in Pulgaon due to some fault. 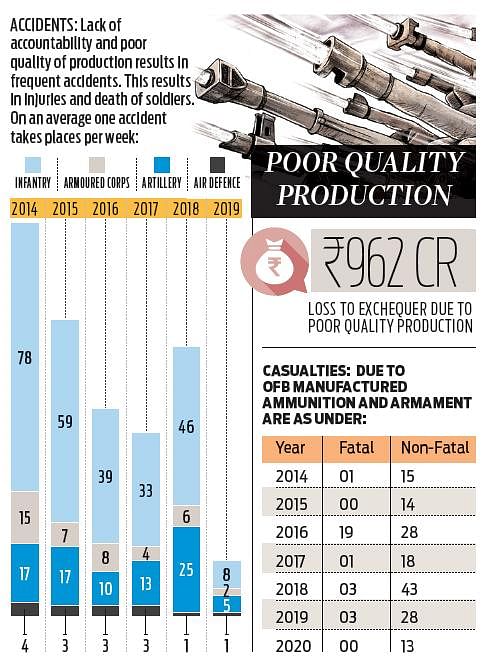 The Army had to destroy such mines costing Rs 303.23 crore to obviate the chances of further accidents.

Indian Ordnance Factories function under the Department of Defence Production, Ministry of Defence. It is a conglomerate of 41 factories, nine training institutes, three regional marketing centres and four controllers of safety.

After the government decided to convert the Ordnance Factory Board into one or more than one 100 per cent government-owned corporate entity, it constituted an empowered group of ministers, under the chairmanship of Defence Minister Rajnath Singh.

It will oversee and guide the entire process, including transition support and redeployment plans of employees while safeguarding their wages and retirement benefits.

Now we are on Telegram too. Follow us for updates
TAGS
Indian Army