Jora phool is the grass flower associated with the West Bengal Chief Minister’s party, the Trinamool. Will it get the votes? Therein hangs a tale.

BOLPUR/SUIRI/RAMPURHAT,BIRBHUM:  Mamata Banerjee lit up Nandigram with a slogan that perhaps encapsulates where West Bengal is right now, in terms of the gap between its reality and its desire. “Cool cool Trinamool, thanda thanda cool, vote paabe jora phool,” she thundered, with an elan that TV advertising professionals would envy. Jora phool is the grass flower associated with the West Bengal Chief Minister’s party, the Trinamool. Will it get the votes? Therein hangs a tale. 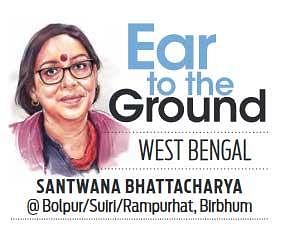 Now, West Bengal may well be renamed Nandigram. You must of course overlook a few distractions  like Amit Shah claiming a clean sweep, in arid Purulia. Or Mamata Banerjee actually demanding that the PM’s visa and passport be cancelled for having visited Orakandi in Bangladesh. Those distractions are quite a handful for an Assembly election, you think? Yes. But then, this is West Bengal.

A little detour: Orakandi is revered by the Matua community, quite a vital component of the voters in three Bengal districts. Nobody here, among the intelligentsia, quite likes the fact that the name of caste has been taken. Bengal’s politics has always avoided it. And that’s the BJP’s opening. Bengal still speaks a universal language. It still responds to resonating phrases like ‘Amar Naam, Tomar Naam, Nandigram, Nandigram...’

That’s not just a slogan, by the way. Kolkata, Howrah, Hooghly, Burdwan, Birbhum, 24 Parganas—districts which vote in the third and fourth phases or later seem somewhat indifferent about what happens to their own constituencies. But they’re not indifferent about Nandigram. Anywhere and everywhere, it’s difficult to get people focused on any other issue. The small talk all around— the small tea shops, the small man walking back after his day’s work in those rich rice fields invariably focuses on that one thing.

It’s the Big Fight. The questions are: Is Didi panicking? Will Suvendu Adhikari pull it off ? Will Nandigram again be the turning point of Bengal’s political history? It’s quite the local thriller. If you so much as mildly declare that you have been to the epicentre and have come out in one piece, you may very well get a discount at a sweet shop, or at Sonajuri haat, Santiniketan.

“What did you see there? Tell us, please. You can pay me later!” Dulal Basak, with that incredulous look on his face, could be the face of the rest of Bengal. He has that look of having accidentally met an astronaut just back from the moon.

Myths abound. That the Adhikaris virtually own Nandigram. That Didi is liberating it the second time over. Or just the opposite: that TMC atrocities have touched such heights that only the BJP can save the people. Nandigram, seven years since the violence against that old farmland acquisition felled even a Left government, is back haunting public memory. For all the contrary feelings that thought may evoke, it’s also influencing voting decisions across districts. Perhaps not even the voter knows where her finger may pass, such are the sentiments here. It’s rich political drama.

Even the long-forgotten Laxman Seth, the erstwhile CPI-M MLA, the villain of the piece in 2007, under whose watch the police firing took place in which over a dozen got killed in 2007, the man you could arguably blame for the Left’s near comatose state in India…even he has come out of the woodwork. And he’s not even contesting, but that’s half the story.

Now, Laxman Seth was called a ‘harmand’ (goon) those days, maybe not without reason. And he was not heard of after a failed attempt to revive his political career in 2019, when he contested the Tamluk parliamentary seat on a Congress ticket. Congress? Yes. The CPI-M had expelled him in 2014, and he had then joined the BJP, before his compass shifted again. Tamluk is his old fort, the place where he’d defeated Sisir Adhikari in 2004. No relation to Suvendu, you ask? Of course, he’s the father, also old Congress stock, was MoS for rural development by the way under Manmohan Singh.

Why are these old stories important? Because they’re part of the narrative in 2021. It’s not so much party politics, as much as the underlying economic issues. Laxman Seth has been giving interviews. And been touching a chord with a rural Bengal that, contrarily, also wants industrialisation. A Bengal that doesn’t want to go to Kerala and Bangalore just to have a job.

“All political parties are the same. When they first come to power, they make promises of a better system, but later the same bad elements come to rule the roost,” says Ranjit Das, a voter in Bolpur constituency in Birbhum. He cites the Nandigram trajectory and draws parallels with the local politics in his constituency. This disillusionment is commonly heard in and around the Visva Bharati campus, perhaps even more keenly in the crafts markets adjacent to Santiniketan. The artisanal markets that dot the now burgeoning campus city may have only an ironic resemblance with things that Tagore said. The poet is mostly to be found caged in photo frames, sold at every street corner. He wanted the world to come to the country. In a way, the country wants the same.

The elections themselves are a local Mahabharata—a distraction, almost. Who has joined whom? That’s the talk everywhere. The protagonists of Nandigram or the general trend of TMC MLAs and other sundry heavyweights switching camps, that’s what everyone talks about. This is the place that gave India Mir Jafar.

If Purba Medinipur—of which Nandigram is one of the 16 Assembly constituencies is seen as Adhikari turf, Birbhum’s 11 Assembly constituencies are considered a stronghold of the TMC. If Suvendu, and his father Sisir in particular, have a deep hold over that neck of the woods, Birbhum is the playfield of TMC district in charge Anubrata Mandal, a local toughie.

The Adhikharis were perceived to be the last word in their bastion, while they were in TMC Mamata allowed their writ to run. (It’s just coincidental that they happen to be on the other side now.) But that federal approach is true about Birbhum too, they say. Whether in Rampur, Siuri or Santiniketan, the refrain is that “she’s too indulgent of ” Anubrata Mandal. In short, what the Adhikaris are or were to Nandigram, Mandal is to Birbhum. “Not a leaf moves without him raising his finger,” they say.

Didi’s allegation that it was the Adhikaris who got the “police in chappals” into Nandigram in 2007 and that’s what led to the mayhem—finds odd resonance here. It’s almost a mythological narrative that gets repeated everywhere. Facts? They belong to another planet. Myths have a self-sustaining life of their own. There are stories about how many got killed, about dead children filled into sacks, about truckloads of dead bodies hidden under vegetables. The mass hysteria around has been reignited, in different ways.

“Didi allows Anubrata to manage this outpost in the same way,” quips a Visva Bharati lecturer, who would rather not be named. The current V-C here, Bidyut Chakrabarty, makes no secret of his support to the BJP and the Prime Minister. It’s fairly overt. But there’s tangible tension on the ground. It’s often, but not necessarily party-related.

The young, for one, have no qualms at all. Deepak, a biotech student from the nearby Puralia, feels a “change” would be good for Bengal—it would bring industry and jobs. “We don’t want to go out of the state to look for employment. Bengal should be an industrial leader again. We can’t be doing artisanal work or cottage industry like our parents for all time. There’s no future in small scale,” he says. Maybe Mahatma Gandhi should have been alive to hear his idea of ‘paribartan’.

Birbhum is of course a TMC fortress, controlled by Mandal with an iron fist. Everyone agrees it’s impregnable. But local street cred is not the only factor. The CAA is an issue here, and it gives the TMC a fillip. Both the Hindus who migrated from then East Bengal and the original Muslim settlers here cite the Assam NRC fiasco. “We may also be thrown out or our names may go missing! Most of us don’t have old papers,” says Subhas. It’s not about religion here, as the national narrative goes, but about the precarity of life that all have faced equally.

The students at Kalabhavan still have a whiff of Left idealism, and have their own story to tell—one of resistance, and of standing to safeguard Bengal’s cultural ethos. Anirban Ganguly, the BJP Bolpur candidate, rubbishes those as “wayward western thoughts”. Tagore? Keep him to a side. “Our central leaders have closely studied culture and thought process,” claims Ganguly.

That’s where the aspirational middle class is, even if they’re not big in numbers. One of them, an old neighbour of TMC’s Anubrata Mandal, predicts that the BJP will get 4 out of 11 seats here, and three more after the elections are over! “Khela hobe,” he quips.