Sitting on a wooden chair in his small book store, Surojit Dey was looking at the BJP roadshow marching along the arterial road of Alipurduar.

COOCH BEHAR/ALIPURDUAR: Sitting on a wooden chair in his small book store, Surojit Dey was looking at the BJP roadshow marching along the arterial road of Alipurduar.

“Look at the faces. They represent all segments of our society college students, government employees, daily wage workers. Most of them are Dalits who used to be the strength of our party five years ago,’’ said Surojit, a TMC worker.

The narrative in the two north Bengal districts adjoining Assam Cooch Behar and Alipurduar comprising 14 Assembly seats which are going to feel the poll heat on Saturday is centred around Dalits.

Voters from the backward classes shifted allegiance en bloc to BJP in the 2019 Lok Sabha polls which caused panic in TMC ranks after the results.

“Dalits decide the fate of parties in at least 20 constituencies in north Bengal,’’ said Surojit. About half of Cooch Behar’s population belongs to SCs. In Alipurduar, 48 per cent are Scheduled Tribes and 20 per cent SCs. Among the SCs, more than 35 per cent are Rajbangsi, the prime target of all parties.

When BJP is promising to set up a battalion in para-military force comprising Rajbangshis, TMC, armed with an RTI document, is labelling the promise as a trick to hoodwink Dalits.

Prasenjit Roy, a school teacher in Cooch Behar and CPI(M) leader, said BJP and TMC are leaving no stone unturned to please the Rajbangshi community.

“In 2016, TMC enjoyed the support of this community, but in 2019 the party bled here because of the shift in Rajbangshi votes. TMC did not allow hundreds of candidates to file nominations in the 2018 panchayat elections and that became a factor,” he said. Roy admits that his party had encouraged its supporters to vote for BJP in 2019 to teach TMC a lesson.

Now, it finds it difficult to bring the vote bank back despite the alliance between CPI(M) and Congress.

“It turned out to be a wrong move. We paved the way for a party which never imagined doing well in north Bengal.” In the 2016 Assembly elections, TMC had bagged 12 out of 14 seats in this region.

After three years, BJP secured lead in 12 of those. With BJP desperate to secure Rajbangshi votes, Mamata Banerjee is banking on a split in the community.

In February, before visiting Cooch Behar, Amit Shah had gone to the residence of Ananta Rai, a self-styled Maharaja of the district who belongs to the Rajbangshi community and has been living in Assam since August 2020.

Rai leads a faction of the Greater Cooch Behar People’s Association (GCPA), which has a history of leading movements often using violence to secure its goals, and seeks to carve out of the district of Cooch Behar and some adjoining areas of West Bengal and Assam to establish a state of Greater Cooch Behar.

While addressing a rally, Shah promised that a battalion in paramilitary forces would be named Narayani Sena and a training centre would be named after Chila Rai, legendary general of the Narayani dynasty army of the 16th century.

BJP had made this promise before 2019 Lok Sabha elections also and members of the community overwhelmingly voted for them. Shah’s announcement was slightly short of expectations, considering that the Rajbangshis have for long demanding a Narayani regiment in Indian Army.

Souvik De Sarkar, a school teacher in Alipurduar, said TMC did not miss the opportunity to brand BJP a party that makes false promises.

TMC is trying its best to exploit this crack in GCPA by bringing some of them into its fold. “It seems Mamata won over a section of the community by taking Bangshi Badan Barman, leader of another GCPA faction, into confidence,’’ said De Sarkar.

Barman said BJP fooled the people of Cooch Behar and he and his followers highlighted it during campaigning this time around.

He cited the formation of a battalion in the state force, creation of a Rajbangshi development board and Rajbangshi (language) academy, approval of 200 Rajbangshi-medium primary schools and state holiday on the birth anniversary of Panchanan Barma (icon of the community) among the steps Mamata has taken for the upliftment of the community. Sensing a fight, BJP has fielded sitting MP Nisith Pramanik from the Cooch Behar Assembly seat.

“Dalits in this region are in our favour. TMC’s efforts to use factionalism among the Rajbangshis will not work,’’ Pramanik said. 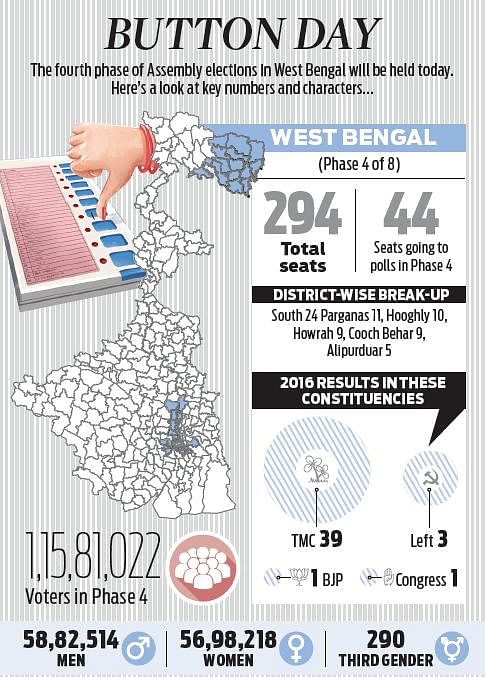