Gorelal Kori's son Kailash claimed he was told on Thursday morning by a hospital staff that his father had died, but was later informed that he was alive.

BHOPAL: A 58-year-old suspected Covid patient was declared dead twice by the staff of a government medical college in Vidisha, Madhya Pradesh, though he was alive. Gorelal Kori was admitted to Atal Bihari Medical College Hospital in a critical condition on April 12.

His son Kailash Kori claimed he was told on Thursday morning by a hospital staff that his father had died, but was later informed that he was alive.

“Again, around 4.30 pm, we got a call from the hospital that an emergency surgery had to be performed on my father. Around 8.30 pm, we were told that he had died and the body would be handed over on Friday morning. When we came to take the body, while other family members prepared for the cremation, we were told that my father was alive, but in a serious condition,” Kailash alleged.

Clearing the ‘confusion’, the medical college dean, Dr Sunil Nandeshwar, said, “The patient was on ventilator support when his heartbeat stopped. The on-duty nurse informed his attendant that he had died. But the doctors revived him with CPR….He is still on ventilator support.”

Meanwhile, last rites of 108 people who died of coronavirus in Bhopal were performed on Thursday, a figure vastly different from the Madhya Pradesh government's claim on COVID-19 fatalities that day, according to records maintained by crematoriums and graveyards in the state capital and officials working there.

The government had claimed that only eight people had died of the infection in Bhopal district in the last 24 hours (on Thursday).

According to the records with two crematoriums and a graveyard, last rites of 156 people were performed on Thursday in the state capital.

Of them 108 were coronavirus-infected, the documents showed.

"Eighty-eight people were cremated in our crematorium on Thursday. Of them, 72 were the ones who had died of coronavirus," Bhadbhada Vishram Ghat (crematorium) secretary Mamtesh Sharma told PTI.

Coronavirus patients who come from other districts to Bhopal for treatment and die here are cremated in the state capital itself, Sharma said.

Bhadbhada and Zada graveyards are authorised to perform the last rites in the district.

But due to a rise in fatalites, another crematorium, Subhash Nagar Vishram Ghat, too, has been roped in for funerals, Sharma said.

"Last rites of 51 people (21 of them Bhopal residents) were performed at our crematorium on Thursday," Subhash Nagar Vishram Ghat manager Sobhraj Sukhwani said, adding that of these 26 had died of the respiratory disease.

"Burial of 17 people took place in our cemetery. Of them, 10 were the ones who died of coronavirus. Eight of the deceased were local while the two hailed from other districts," Zada Graveyard Committee, Jahangirabad, president Rehan Golden said.

According to a state government bulletin of Thursday, 666 patients had died of COVID-19 in Bhopal district since the outbreak.

District Chief Medical and Health Officer Dr Prabhakar Tiwari could not be contacted for his comment on the issue. 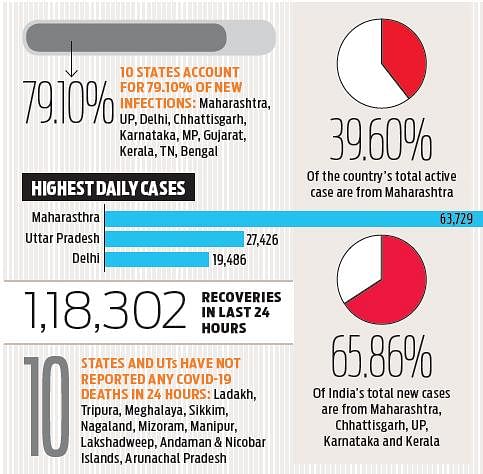 Now we are on Telegram too. Follow us for updates
TAGS
Coronavirus COVID-19