SRINAGAR: There’s no respite from bone chilling cold in the Kashmir Valley where the night temperature in Srinagar dropped to minus 8.8 degree Celsius — the lowest in three decades.
Traditionally, the period of Chilai Kalan, which starts on December 21 and ends on January 31, are the coldest in the Valley. The MeT officials are expecting some relief as the Chilai Kalan is ending. 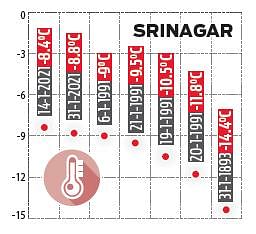 There have been 17 instances in the last 38 years when Srinagar recorded night temperature of minus 8 degrees Celsius or less, the Met official said.  Such is the cold that shikarawalas are facing a tough time rowing their boats in the frozen waters of the Dal Lake. The men have to break the sheet of ice formed on the surface to make way for their boats.

People are using hot water, firewood and blue light gas to defrost pipelines for getting water in their households. However, many are complaining that pipes and taps remain blocked despite using every possible means. Water is being brought from far-off places in many areas, especially out of the main city, as a result of the blocked pipelines due to the extreme cold.

Javed Ahmad, a resident of uptown Srinagar, claimed authorities are not helping locals in clearing the frozen pipes and taps. “They are just busy promoting their non-existent ‘good work’ on social networking sites,” he fumed.