The Finance Minister said the APMCs mandis will be strengthened with financial support from the Agriculture Infrastructure Fund.

NEW DELHI: In what can be perceived as a move to assuage the farmers’ concerns on minimum support price and the mandi system, Finance Minister Nirmala Sitharaman on Monday said a part of the Budget allocation for agriculture would be spent on developing infrastructure of APMCs. 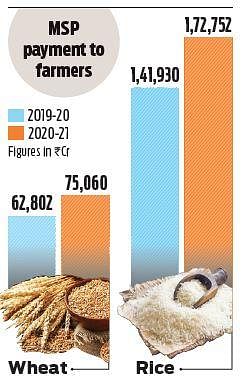 The government is committed to farmers’ welfare, Sitharaman asserted.

Dismissed the apprehensions that farm laws would weaken the mandis, the finance minister said the APMCs mandis will be strengthened with financial support from the Agriculture Infrastructure Fund.

The Budget proposed that 1,000 APMCs will be connected to the e-National Agriculture Market (e-NAM).

Highlighting the NDA government’s commitment to doubling farmers’ income, Sitharaman said, “The MSP regime has undergone a change to assure a price that is at least 1.5 times the cost of production across all commodities. Procurement has also continued to increase at a steady pace. This has resulted in increase in payment to farmers substantially.”

Farmers have been up in arms against the government over the three new agriculture laws, particularly over the issues of MSP and APMCs.

The Budget saw an increase in the Agriculture Infrastructure Fund to Rs 40,000 crore and the doubling of the Micro Irrigaation Corpus to about Rs 10,000 crore while agriculture credit has been raised to Rs 16.5 lakh crore.

Cotton farmers have also seen a sharp rise in the amount that was paid to them for procurement, according to the finance minister.

10% hike in farm loan disbursal.
Target: Rs16.5 lakh cr
Development cess of up to 100% introduced to create post-harvest infrastructure. Govt to make sure there’s no additional burden on consumers due to this
Allocation to Rural Infrastructure Development Fund raised from Rs30,000 cr to Rs40,000 cr