Last year, the armed forces had to make emergency procurement and mobilise a massive 50,000 soldiers with weapons along the Line of Actual Control (LAC).

NEW DELHI: Keeping in mind the tension along eastern Ladakh with China, the central government has shown an urge to upgrade resources through military modernisation. The allocation of defence budget for the year 2021-22 sees a significant rise towards capital expenditure.

Allocation for capital expenditure is Rs 21,326 crore, a rise of 18.75 per cent. Last year, the armed forces had to make emergency procurement and mobilise a massive 50,000 soldiers with weapons along the Line of Actual Control (LAC).

China had moved in its troops to alter the status quo along the LAC in Eastern Ladakh. High-altitude gears, missiles and armaments had to be bought on an emergency basis.

The Air Force had also mobilised its strategic assets near the LAC. 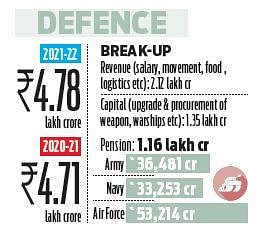 This is a 7.34 per cent rise from last year’s Rs 3.37 lakh crore.The jump in capital allocation will give a push towards procurement of modern platforms and new equipment.

Capital allocation last year was Rs 1.13 lakh crore and it has risen to Rs 1.35 lakh crore this year.

Talking about emergency procurement, Army chief General MM Naravane had recently said that 38 deals were made through the ‘emergency and fast track’ route.

Estimated value of these was about Rs 50,00 crore beyond the additional capital procurement worth Rs 13,000 crore.

However, there has been a significant decline in defence pensions from the budget estimates of last year. From last year’s Rs 1.34 lakh crore, it has come down to Rs 1.25 lakh crore, a dip of about 13.4 per cent.

Speaking on the issue, Lt Gen Vinod Bhatia (retd) said: “It happens every year and there is nothing to worry as money gets allocated in the last quarters to make up for the shortages.”

“Nearly 20 per cent increase in capital Defence Budget is positive. Hope we will not see an overspend on the Revenue and Pensions,” tweeted former Chief of Army Staff Gen (retd) V P Malik.

Another positive aspect was the assurance that the “capital defence budget” will be non-lapsable, he added.