The Union Health Ministry also informed the House that a technical resource group was set up in May last year to deliberate on various aspects of optimising C-section rates.

NEW DELHI:  Alarmed at the excessive rise of Caesarean sections in private hospitals in many states, the Centre has constituted an expert group to examine the state-wise findings related to the surgical procedures, it informed the Parliament on Tuesday.

“An expert committee was constituted in December to examine the state-wise findings related to C-sections,” said the Union Ministry of Health and Family Welfare in response to an unstarred question by MP KC Ramamurthy.

The ministry also informed the House that a technical resource group was set up in May last year to deliberate on various aspects of optimising C-section rates. 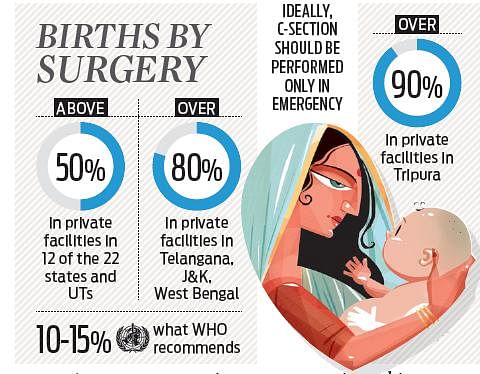 Previous surveys had shown that the percentage of births by C-sections in private health facilities was 27.7 in NFHS 3 and 40.9 in NFHS-4.

Ideally, C-sections should be performed only if there are complications from pregnancy which puts the health of the mother or child at risk.

There are concerns that many doctors push for it either due to monetary benefits or for the sake of their own convenience.

The survey noted that public health facilities recorded a relatively smaller percentage of births by C-section.

The highest share of C-sections in public health facilities was recorded in Telangana at 44.5 per cent. The lowest of 3.9 per cent was in Bihar.

However, public facilities too seemed to be overusing C-sections in 16 states and UTs and were below 10 per cent in only four states Mizoram, Meghalaya, Nagaland and Bihar — where the share of institutional births was also on the lower side.

Now we are on Telegram too. Follow us for updates
TAGS
Caesarean sections C-Sections Pregnancy