Over 20 per cent of adults have antibodies against Covid-19 in India: ICMR sero-survey

The survey, based on the combined results from both the tests has estimated the average infection prevalence at about 25 per cent.

NEW DELHI: The overall percentage of people above 18 years with antibodies against Covid-19 virus in India was 21.4 per cent, the third national sero-survey by the ICMR to assess the true spread of SARS CoV 2 has shown. For the survey carried out between December 17 to January 8, blood samples from 28,589 individuals and another group of 7,171 healthcare workers were tested from 70 districts across 21 states and UTs.

The findings also revealed that while seroprevalence among children aged 10-17 years was 25.3 per cent, it was 25.7 per cent among healthcare workers, announced ICMR director general Balram Bhargava at a press briefing on Thursday. Unlike earlier surveys that looked for antibodies against the viral nucleocapsid, the third survey also looked for spike protein antibodies.

The overall figure of 21.7 seropositivity, shared by Bhargava, is based only on the results of spike protein antibodies and not the other one.

The survey, based on the combined results from both the tests has estimated the average infection prevalence at about 25 per cent, a figure skipped in the briefing but may later get published in the detailed scientific paper.

“Amongst healthcare workers, seroprevalence was the highest with 25.7 per cent. Statistically, it was not different between doctors, nurses, field staff, and paramedics, but it was highest among doctors and nurses with 26.6 per cent as against the administrative staff which was 24.9 per cent,” said the ICMR DG.

​He stressed that as the survey has shown still lower penetration of the virus in the population, a large proportion still remains vulnerable and therefore prevention is the key and vaccines are necessary. 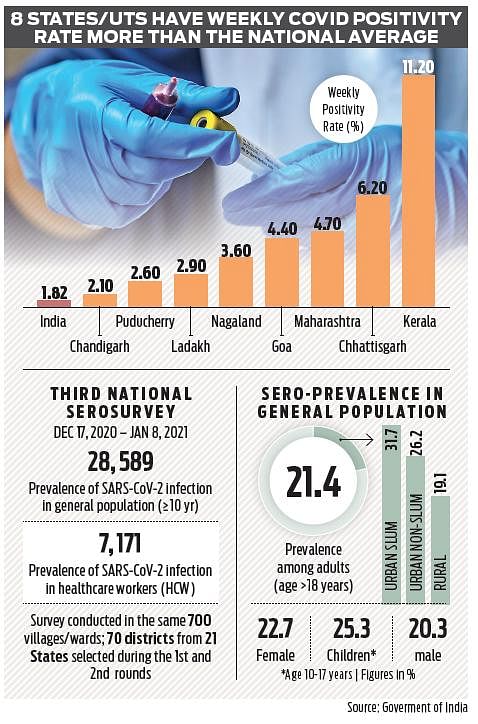 Now we are on Telegram too. Follow us for updates
TAGS
ICMR Anti-Bodies COVID 19 Coronavirus Coronavirus in India COVID 19 Pandemic

Public participation should be basis of celebrations for India's 75 years of independence: PM Modi