Ready to protest till October, there will be no talks under pressure, say farmers

NEW DELHI:  Announcing that the agitation against the farm laws would go on till October, farmer leader Rakesh Tikait declared on Saturday that talks with the government would not happen under any pressure. Addressing farmers during the nation-wide chakka jam protest, Tikait said they were giving the government time till October 2 to repeal the contentious laws, till then they would stay put on the borders. “We will sit here till October 2. After that, we will do further planning.

We will not hold discussions with the government under pressure. Nobody can touch the farmlands. Farmers will protect them. Both farmers and soldiers should come forward,” Tikait said. It was not clarified if the deadline had anything to do with the birthday of Mahatma Gandhi. He said there was no chakka jam in Uttar Pradesh and Uttarakhand as they had inputs that some people might take advantage of the protest and could indulge in violence. 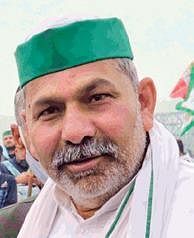 “If the government is placing nails on our way then we will grow crop there. We are ready to talk but it has to be on an equal platform, no pressure tactics will work.” In sharp contrast to the farmers’ tractor rally on Janurary 26, which turned violent, Saturday’s protest was completely peaceful and took place under heavy security cover in Delhi and adjoining states. With the capital, Uttar Pradesh and Uttarakhand out of the ambit of the road blockade, vehicular movement was affected mainly in Punjab, Haryana and Rajasthan.

Roads were blocked in several places in Punjab and Haryana from 12 noon to 3 pm. Farmers parked tractors, trailers and other vehicles on national, state highways and other roads. Women took part in numbers in Sangrur and Ludhiana. Punjabi actors Binu Dhillon and Dev Kharoud with singer Pammi Bai attended the blockade in Patiala. There were similar scenes in Rajasthan. Most cities saw tractor rallies on state and national highways. The ruling Congress provided support to the farmers.

In Jodhpur, Udaipur, Sikar and Jhunjhunu, the chakka jam caused traffic congestions. Entry points to major highways from Jaipur to Agra, Delhi and Ajmer saw long queues of vehicles for over three hours. There was no road blocking in UP and Uttarakhand, as announced by Samyukta Kisan Morcha (SKM). UP had deployed around 144 PAC companies, six paramilitary companies, with senior officers at the state and national highways.

Farm leaders put under house arrest in UP
In parts of western UP, including Agra, a number of farmer leaders were under house arrest. But things remained peaceful and a joint delegation of BKU and SKM submitted a memorandum of demands to the District Magistrate of Agra. In Delhi, 60 persons were detained for demonstrating in favour of the farmers.

No internet at Singhu, Tikri
Internet services remained suspended at Singhu, Ghazipur and Tikri borders where thousands of farmers have been living and camping for over two months

Now we are on Telegram too. Follow us for updates
TAGS
farmers protest Rakesh Tikait Farm Laws