Currently, there are 3,693 monuments of national importance under ASI protection. In 321 cases, instances of encroachments at the centrally protected monuments have been located.

NEW DELHI:  The ASI has listed 24 monuments which remain untraceable, according to the Ministry of Culture. The ASI has tried to locate/ identify the monuments through field offices based on inspection, old records, revenue maps and published reports.

Currently, there are 3,693 monuments of national importance under ASI protection. In 321 cases, instances of encroachments at the centrally protected monuments have been located.

This was in response to a question in Parliament that if the government was aware of the fact that many such monuments have been encroached upon and a few have been completely ruined, and the measures taken for their restoration.

While the superintending archaeologists in-charge of the circles have the power to issue eviction notices/orders to the encroachers, the ASI also seeks assistance in containing and removing encroachments from the respective state governments/police forces, it said. Encroachments in the premises of the protected monuments/area are removed as per provisions in Monuments Act 1958. 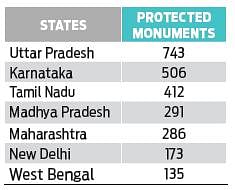 Now we are on Telegram too. Follow us for updates
TAGS
Archaeological Survey of India Ministry of Culture Untraceable monuments