NEW DELHI:  As many as 56,69,960 cases are pending in high courts across the country, with 12.58 lakh of them awaiting verdict for over a decade, according to the latest information from the Union Law Ministry. The Supreme Court had as many as 65,331 cases, including 52,391 civil cases and 12,940 criminal cases, pending before it as on February 5, 2021, it said.

Union Law Minister Ravi Shankar Prasad shared the statistics on the backlog of cases in the Rajya Sabha on Thursday while replying on the issue posed by party colleague Kidodi Lal Meena. “Disposal of pending cases in courts is within the domain of the judiciary,” Prasad said when asked what measures have been taken by the government to expedite the process.

Prasad said the pendency of cases in courts depends on several factors, including availability of adequate number of judges, supporting court staff and physical infrastructure. He added that complexity of facts involved in the case, nature of evidence, cooperation of stakeholders such as bar, investigation agencies, witnesses and litigants also determine the time taken to decide cases. 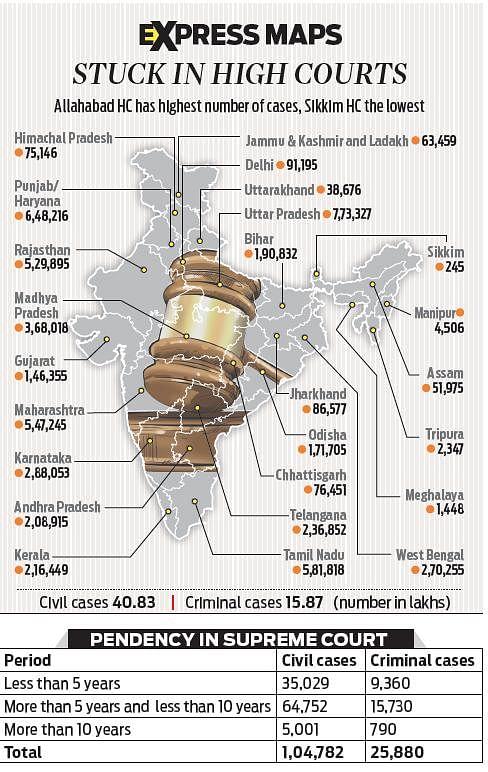 Now we are on Telegram too. Follow us for updates
TAGS
56 lakh cases cases pendency