The Election Commission has announced the schedule for the Assembly elections for  Tamil Nadu, Kerala, Bengal, Assam and Puducherry on Friday.

Here is the schedule

Arora said, "Our tributes to the COVID warriors, doctors, paramedics, nurses, researchers, scientists and all our officials on election duty who are located on the frontline.

"In the thick of the pandemic, ECI started test trials with elections to 18 seats to Rajya Sabha. After that, came the challenge of the Bihar elections, it was indeed a watershed moment for ECI. It proved to be a litmus test." 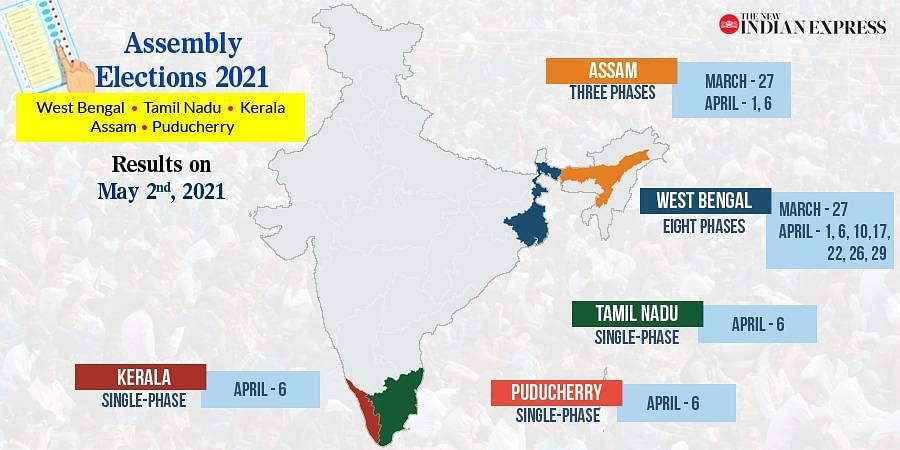 The CEC further added that a total of 824 assembly constituencies will be going to the polls during these elections. 18.68 crore electors are eligible to cast their vote at 2.7 lakh polling stations in the four states and the Union Territory of Puducherry.

Among some key points announced by the CEC were the extension of voting time by one hour like in the Bihar polls, door-to-door campaigning being restricted to five people and the allowing of roadshows, subject to COVID protocols being followed.

Critical police stations have been identified and adequate security arrangements have been made. CCTV monitoring and webcasting will be done in all critical and vulnerable polling stations, Arora said, further adding that all the poll officials will be vaccinated against COVID-19 before elections for the five assemblies.

Model code of conduct comes into force in all five States including Tamil Nadu which are going to polls; Tamil Nadu to have 88,936 polling stations, says Chief Election Commissioner Sunil Arora @xpresstn @NewIndianXpress

The terms of the legislative assemblies of these four states are ending in May and June.

In Puducherry, President's Rule has been imposed after the V Narayanasamy-led Congress resigned earlier this week ahead of the trust vote.