The BJP has roped in its veterans to shoulder organisational responsibilities in Punjab and Haryana, besides bolstering the party’s reach among Dalits.

NEW DELHI:  The BJP has roped in its veterans to shoulder organisational responsibilities in Punjab and Haryana, besides bolstering the party’s reach among Dalits. Thursday’s decision is seemingly in line with an assessment of the tough political challenges in the northern states on account of the farmers’ protests.

BJP veteran Saudan Singh was appointed the vice-president of the organisation with the responsibilities of Punjab, Haryana, Himachal Pradesh and Chandigarh, which will also be his base. Singh was the joint general secretary (organization) earlier, and was seen much in action in Rajasthan.

The BJP has also appointed the party veteran V Satish as a “Sangathak (organiser)”, with the responsibility including SC-ST Morcha coordination. Satish will also look after the Parliamentary office coordination. Additionally, national joint general secretary Shiv Prakash, with a base in Bhopal, will look after the 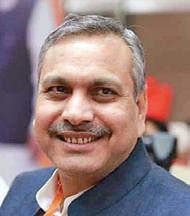 Saudan Singh’s task is cut out apparently with the BJP seemingly facing the ire of the farmers in Punjab. The ripple effect of the agitation is also showing impact in Haryana. In Himachal Pradesh, the BJP will be bracing up for the Assembly elections in 2022.

The Hathras gangrape in UP had for a while shown the BJP’s weakness in lacking credible Dalit leadership. The BJP leadership will be counting upon Satish, who has vast experience in the RSS and the party, to work on the strategy to consolidate support base among the Dalit, which is seen electorally formidable in the western UP.

Now we are on Telegram too. Follow us for updates
TAGS
BJP farmers protest Saudan Singh