The Supreme Court also sought cooperation from the farmers' unions. "Those who genuinely want resolution will go to the panel," it said.

NEW DELHI: The Supreme Court on Tuesday issued an “extraordinary order” to stay the implementation of the three disputed farm laws and set up a panel of four agriculture experts to talk to all stakeholders and report back to the court within two months. A bench headed by CJI S A Bobde stayed till further orders the Farmers (Empowerment and Protection) Agreement of Price Assurance and Farm Services Act; Farmers Produce Trade and Commerce (Promotion & Facilitation) Act; and the Essential Commodities (Amendment) Act.

“We are of the view that the constitution of a committee of experts in the field of agriculture to negotiate between the farmers’ bodies and the Government of India may create a congenial atmosphere and improve the trust and confidence of the farmers... a stay of implementation of all the three farm laws for the present may assuage the hurt feelings of the farmers and encourage them to come to the negotiating table with confidence and good faith,” the 11-page order by the three-judge bench read. The court’s order comes a day after pulling up the Centre for its poor handling of farmers’ agitation.

The bench also said that while the court doesn’t want to stifle a peaceful protest, “the extraordinary order of stay of implementation of the farm laws will be perceived as an achievement” and will encourage the agitating farmers to end their protest. Unlike on Monday, the Centre represented by Attorney General K K Venugopal and Solicitor General Tushar Mehta did not oppose the stay on the laws. 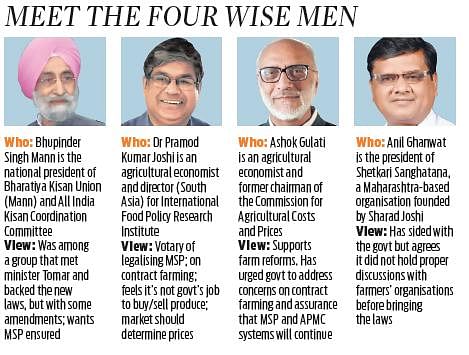 The panel members are BKU (Mann) national president Bhupinder Singh Mann; Pramod Kumar Joshi, director, South Asia international Food Policy; agriculture economist Ashok Gulati; and Shetkari Sanghatana leader Anil Ghanwat (see box). The SC rejected advocate M L Sharma’s submission that farmers won’t talk to the panel. “If you want to agitate indefinitely, you can. Every person who is interested in solving the problem is expected to go before the committee. The committee will not punish you or pass any orders. It will submit a report to us,” it said.

The court said it is concerned about the validity of the laws and also about protecting the life and property of citizens affected by protests. The bench turned down farmers’ demand that the Prime Minister should approach them to hold negotiations and said, “We cannot ask the Prime Minister... he is not a party here.” The bench was surprised to learn that none of the three senior counsel appeared for the farmer unions Tuesday. “Where is (Dushyant) Dave? Yesterday he said he will get back today with the views of farmers unions. They have not logged in also,” the CJI remarked.