As per the latest report by the Bureau of Police Research and Development (BPRD), about 5.31 lakh posts, which is nearly 20 per cent of the sanctioned strength, are vacant at various levels in police departments across the country.

Uttar Pradesh leads the list with 1.11 lakh vacant posts, which is nearly 27 per cent of the sanctioned strength of 4.15 lakh personnel.

Significantly, nearly 93 per cent of the total 5.31 lakh vacant posts belong to subordinate levels (Sub-inspector and below).

The data showed that over 4.93 lakh vacancies are among lower level posts including sub-inspector, head-constable and constable. This is significant given the fact that these are the officials involved in policing at ground level. 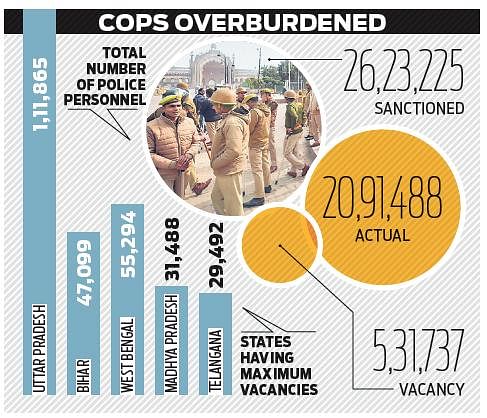 Importantly, comparison of 2019 and 2020 data disclosed that vacancies have only increased over the years from 5.28 lakh in 2019 to 5.31 lakh in 2020. Issues of overburdened police and long working hours have been raised in the courts many a time.

While hearing a petition which claimed that law and order situation in the country was deteriorating due to a large number of vacancies in police services, the Supreme Court had observed in a August 2017 order that, “If police vacancies are filled up, it will help in dealing with several law and order problems. You need to fill up the vacancies and do the recruitment in a time-bound manner.”

West Bengal comes at second position with over 55,000 posts lying vacant against the total sanctioned strength of 1.53 lakh posts.

Higher number of vacancies in states like UP and Bihar are a cause for concern as these two states report a large number of crimes. The latest NCRB data has disclosed that UP tops the chart with a total 6.28 lakh cases while Bihar has reported 2.69 lakh cases.