The Centre has said that all 1.65 crore doses of the two vaccines have been sent to the states for the first phase of the exercise.

NEW DELHI:  The Centre appears to be taking a wait and watch approach on Covaxin going by its limited use in vaccination of healthcare workers in the first phase of the Covid immunisation drive so far.

As 110 million doses of Serum Institute of India’s Covishield and 55 million doses of Bharat Biotech’s Covaxin were ordered for the first phase of the nationwide drive, the numbers suggest that the two vaccines were to be used in a 2:1 ratio. 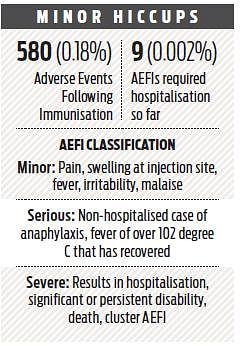 The Centre has said that all 1.65 crore doses of the two vaccines have been sent to the states for the first phase of the exercise.

But officials in several states this newspaper checked with confirmed that they have each received only 20,000 doses of Covaxin to begin with.

“The supply of the vaccines is being totally controlled by the Centre and even though we have not been given an explanation, it looks like the Health ministry wants to see how the immunisation with this vaccine goes before launching it in a major way,” said a senior Bihar official.

A health bureaucrat in Haryana too confirmed it. “Since Covaxin is being launched in clinical trial mode, the government wants to keep an eye on adverse events and that’s why only a limited number of people will get it during this phase.”