Enter at your own risk: Uttarakhand village bans entry for members, leaders of 'anti-farmer' BJP

More than 20,000 farmers from the district of Udham Singh Nagar have already joined others in Delhi at the protest site.

DEHRADUN: As farmers agitation continues against the newly framed farm laws, a village in Uttarakhand has banned the entry of Bhartiya Janta Party members, workers and leaders.

Posters, banners and hoardings have come up in Malpuri village of Udham Singh Nagar district warning the 'Anti-Farmer' BJP workers and leaders.  The banners further warn that if they venture into the village, none will be responsible for their 'security'.

Suba Singh, former village pradhan said, "A total of 70 farmers have sacrificed their lives for the movement and the BJP led government is still adamant. We are not letting anyone from the BJP to enter our village. If the party doesn't care for us we don't care for them."

Paramjit Singh, another resident of the village said, "The people are angry and if the party leaders or members come to the village, they will have to face the inevitable. The only way forward is that the government moves back on the farm laws which are not good for the farmers."

The state BJP leaders were not available for the comment.

More than 3,000 farmers from Uttarakhand’s Udham Singh Nagar district will drive their tractors to Gazipur on the Delhi border on January 23 to participate in the kisan tractor parade on Republic Day in the national capital.

Earlier this month, farmers from the district of have started free bus service to ferry farmers to Delhi at the protest site. The service is available two days a week- Monday and Thursday.

The expenses of the service is being borne by local Gurudwara committees for now and the plan is to expand the service to 3-4 days soon.

In December 2020, Uttarakhand state police registered case against over 1000 farmers after they marched towards Delhi breaking the barricading by Udham Singh Nagar district police. 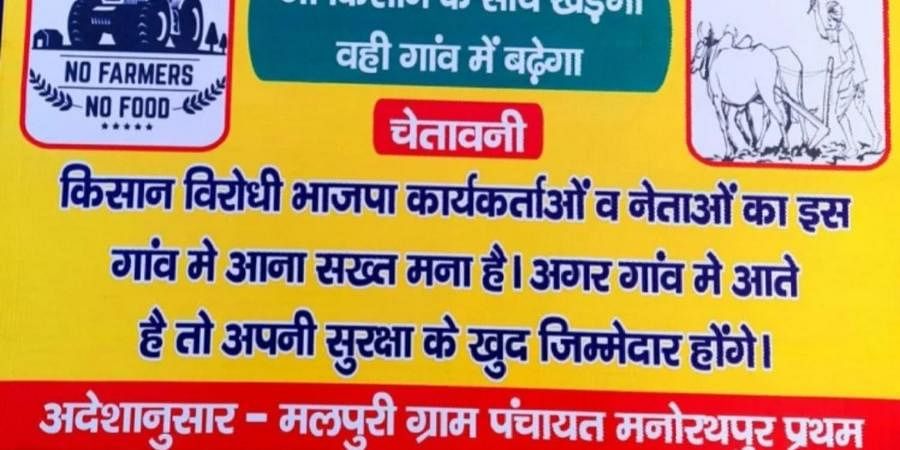 The police had tried to stop the farmers by force responding to which the farmers defied the ban and went ahead.

The district with 42% of agricultural produce leads among 13 districts of Uttarakhand state in terms of agriculture and is also known as the food bowl of the state. With a variety of crops like rice, wheat, maize, barley, sugarcane and others the district produces enough to fulfill food requirements of the population of state of over 1.15 crore.

The ‘terai’ district is known for the cultivation of the crops like rice, wheat, sugarcane, maize and soybean and cropping pattern is an ideal way to spot the trend of the various crops grown across various parts of the district.