Data of airports disclose that the number of domestic passengers in December was 43 per cent less than the corresponding period in 2019.

NEW DELHI: Domestic aviation traffic is yet to reach pre-Covid levels, after seven months of resumption of domestic flights.

Data of airports disclose that the number of domestic passengers in December was 43 per cent less than the corresponding period in 2019.

Similarly, aircraft movement in December was nearly 30 per cent less than 2019.

Mumbai airport, one of the busiest in the world, saw 12,777 aircraft movements in December — a fall of 37.4 per cent from the previous year — according to data from the Airports Authority of India.

This was 27.8 per cent less in Delhi and 39.4 per cent in Chennai. Domestic flights resumed with restrictions on May 25, 2020, after the lockdown of two months, with nearly 30,000 passengers. Numbers went up gradually along with the lifting of restrictions.

Data from aviation regulator DGCA disclose that occupancy of airlines or the passenger load factor (PLF) of major commercial airlines was 66-78 per cent in December, around the same recorded previous month, but way below the 80-92 per cent in the same period in 2019. IndiGo’s PLF was 71.5, Air India’s 66.9 and GoAir’s 66.3.

Jitender Bhargava, former Executive Director of Air India and author of ‘The Descent of Air India’ said, “Business meetings are not taking place like they did earlier. They are meeting mostly through video conferencing. Family and friends are not travelling because nobody is sure if you would get infected or not. Leisure travel is virtually absent because of the fear of travelling. A lot of people have faced lost jobs. There are many factors.”

Sanjay Kumar, Chief Strategy and Revenue Officer of IndiGo, said: “The advent of vaccination has improved the sentiment, with people looking at travelling within the country this year. This sale will help them plan domestic travel in advance and at affordable fares.” 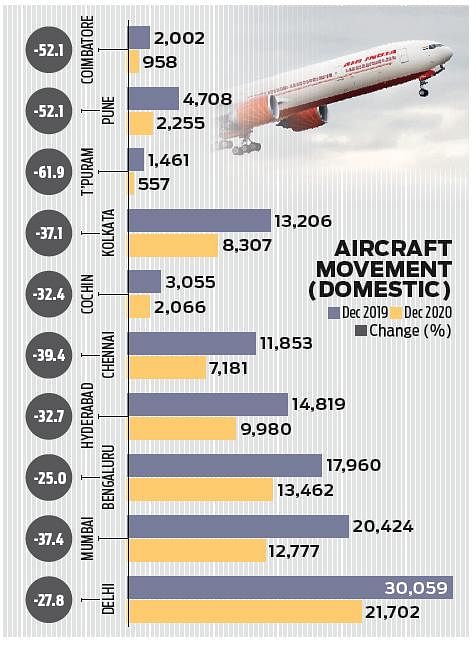 Now we are on Telegram too. Follow us for updates
TAGS
Airports Authority of India DGCA