The test assumes significance as it came a few days after the Union Cabinet chaired by PM Narendra Modi gave its go-ahead to the export of Akash missile systems to friendly countries.

BHUBANESWAR: Achieving a major milestone in the ongoing Surface to Air Missile (SAM) programme, India on Monday successfully conducted the first test of Akash-New Generation (NG) aiming to bolster country’s air defence capabilities.The missile was launched from a mobile platform at the Launching Complex - III of the Integrated Test Range off Odisha coast at about 2.30 pm against an electronic target.

Defence sources said, the missile intercepted the target with text book precision having met all the test objectives by performing high manoeuvrs during the trajectory. Performance of the command and control system, onboard avionics and aerodynamic configuration of the missile was successfully validated during the maiden trial.Akash-NG is a new generation SAM system meant for use by Indian Air Force to intercept high manoeuvring low radar cross section aerial threats.

This advanced variant comes with Active Electronically Scanned Array (AESA) multi-function radar that features all three functions - search, track and fire control in one platform. The earlier version is guided by phased array fire control radar.The missile, with canisterised launcher and much smaller ground system footprint, has been developed with better deployability compared to other similar systems. The multi function radar was tested for its capability of integration with new missile system.

The successful maiden test comes close on the heels of the Union Cabinet chaired by Prime Minister Narendra Modi that gave a go ahead to export of Akash missile systems to friendly foreign countries.DRDO Chairman and Secretary, Department of Defence (Research and Development) G Satheesh Reddy termed the Akash-NG team’s achievement as path-breaking which will pave way for completion of development of the system for engaging stealth air targets with ultra low radar observability.

The new Akash system can defend an area of at least 10 times better compared to any short range SAM and is capable of engaging up to 10 targets simultaneously. The earlier variant has a maximum range of 30 km, while Akash-NG can strike targets up to 70 km.Akash is India’s first indigenously designed, developed and produced air defence system. It also is the cheapest surface to air missile ever produced in the world with supersonic powered intercept.

The test launch was carried out by a combined team of DRDO, Bharat Dynamics Limited (BDL) and Bharat Electronics Limited (BEL) in the presence of IAFofficials. Defence Minister Rajnath Singh congratulated the scientists and IAF for the maiden achievement. Development of the Akash-NG was approved in September 2016 with a funding support of around Rs  500 crore. 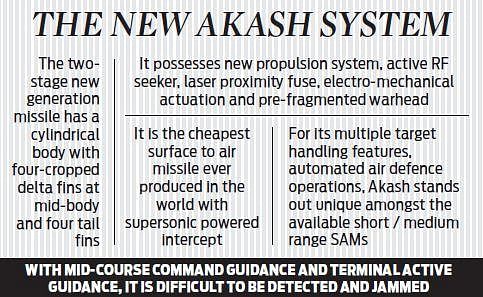 Now we are on Telegram too. Follow us for updates
TAGS
Akash next genration missile Akash missile SAM missile DRDO