BHOPAL: Indore Municipal Corporation is now in the eye of the storm following a series of viral videos showing an official team abandoning eight to ten aged destitute on city’s outskirts, but later lugging them back on the same truck following opposition by local residents. The incident comes in the backdrop of Indore's attempt to win the country’s cleanest city tag for a fifth consecutive year.

Three videos went viral over social media on Friday, two of which showed the IMC team abandoning aged destitute near the highway despite biting cold. The video which was shot by a local resident Rajesh Joshi in the Kshipra area on Indore’s outskirts showed the IMC team throwing the belongings of the elderlies on the roadside, after alighting them from the truck.

In one of the videos, the voice of local resident Rajesh Joshi can be clearly heard narrating how the IMC team has brought the homeless elderlies in a truck and then abandoned them on the highway before throwing their belongings on the same road.

A subsequent video shows the team lugging the elderlies back on the same yellow truck, following opposition and questioning by local residents in Kshipra area against abandoning the aged destitute on the highway amid the biting cold. 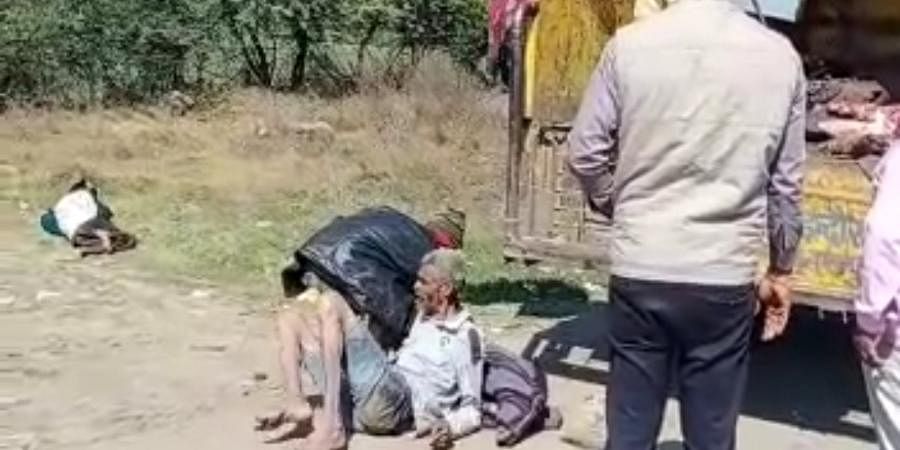 “The incident happened between 2 and 2.30 pm. An IMC truck carrying around 8-10 elderlies came here, after which the staff on the truck forcibly alighted the aged people, including two to three women, on the roadside. When I asked the IMC staff why they were doing so with the homeless, the staff responded that they’ve been directed by the authorities to leave them here as they are creating trouble and filth in Indore city. Subsequently, the truck was leaving the place after abandoning the elderlies, but we forced it to return and take back the elderlies,” said Rajesh Joshi, the Kshipra resident who shot the videos.

The opposition Congress state spokesperson Narendra Saluja was quick to tweet the videos of the spine-chilling episode which happened on Indore’s outskirts on Friday. “In the name of keeping the city clean, the IMC staff went to Kshipra (on Indore’s outskirts) to abandon the elderlies despite biting cold. What can the IMC staff do, they are acting in line with the ruling BJP’s new ideology of abandoning its veteran politicians LK Advani, Dr Murli Manohar Joshi and Yashwant Sinha.”

With the prime opposition party making the development a big political issue, CM Shivraj Singh Chouhan ordered the suspension of IMC deputy municipal commissioner Pratap Solanki, under whose supervision the work of shifting the destitute elderlies to rayan baseras (shelters) was taking place. The suspended official has been attached to the Urban Development Directorate in Bhopal.

According to Indore district collector Manish Singh, “the CM is angry over the entire episode of the elderly being abandoned instead of getting shifted to the Rayan Baseras (winter shelters). Services of a supervisor and his subordinate have been terminated, while the deputy municipal commissioner Pratap Solanki has been suspended. The victums have been shifted safely to a nearby Rayan Basera (winter shelter).”

Importantly, MP’s commercial capital Indore, also the largest and most populated city in the state, has been adjudged India’s cleanest city for four consecutive years under Swachh Bharat Abhiyan and the city’s eyeing the coveted tag fifth time now.

Now we are on Telegram too. Follow us for updates
TAGS
Indore Municipal Corporation IMC Indore viral video