The records, which included documents, photographs and audiovisuals, reveal strong imprint of Marathi language and cultural in the disputed region, the state claimed.

MUMBAI: After Maharashtra CM Uddhav Thackeray called for declaring the Marathi-speaking areas in Karnataka a Union Territory, the Maha Vikas Aghadi government released old records in a bid to bolster the state’s claim over these areas.

The records, which included documents, photographs and audiovisuals, reveal strong imprint of Marathi language and cultural in the disputed region, the state claimed. As per the documents, Marathi was one of the most prominent languages along with English and Konkani in Karwar 60 years ago.

“The first Marathi newspaper, Vichari, was published in 1912 in the area. Besides, signboards of this area were in Marathi and even the reports of various co-operation boards and other government reports in the area were published in Marathi only. There are over 100-125 years old documents that establish how this area belonged to a united Maharashtra,” stated a note issued by the chief minister’s office.

A 35-minute black and white film titled A case for justice, produced by the Maharashtra government 50 years ago, was also re-released in digital format which makes a case for inclusion of Belgaum and other border areas in Maharashtra.

“The folk songs, dances, old books, newspapers, temples and government records reveal the imprint of Marathi dominance. But later, the Karnataka government forcefully tried to erase the imprint of Marathi by changing names of cities, burning old records, shutting down Marathi schools and theatres and so on,” alleged Maloji Ashtekar, a resident of Belgaum and member of Maharashtra Ekikaran Samiti.

According to the Maharashtra government’s affidavit in Supreme Court, 865 villages and six cities like Belgaon, Karwar, Nipani and Alyal were parts of a united Maharashtra. Deepak Pawar, official on special duty in Maharashtra government, in his book on the territorial dispute, says that to counter Justice Mehr Chand Mahajan’s ‘biased report’, former Maharashtra chief minister AR Antully had written a book titled Mahajan Report Uncover. 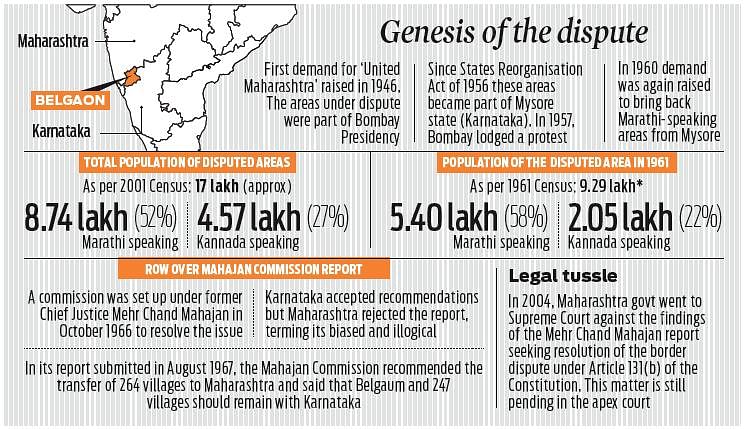 Now we are on Telegram too. Follow us for updates
TAGS
Uddhav Thackeray Maha Vikas Aghadi Maharashtra Ekikaran Samiti