These rankings were based on 53 indicators which included prison staff, police and police officers, among others.

NEW DELHI:  Uttar Pradesh came at the bottom among the large and mid-sized states when it came to overall delivery of justice, according to the India Justice Report (IJR) 2020. The northern state scored 3.15 out of 10 while Maharashtra fared the best among the 18 states with a score of 5.77 out of10.

These rankings were based on 53 indicators which included prison staff, police and police officers, among others. The overall overcrowding had increased and 69 per cent of the prison population still comprise people awaiting investigation and trial.

The IJR is an initiative of Tata Trusts in collaboration with the Centre for Social Justice, Common Cause, Commonwealth Human Rights Initiative, DAKSH, TISS-Prayas, Vidhi Centre for Legal Policy and How India Lives. The maiden IJR was announced in 2019.

While the pandemic had highlighted the need for speedier incorporation of technology into the justice system, on an average, less than half of all states/UTs had 90 per cent of their jails equipped with video-conferencing facilities.

However, the increasing use of technology without rigorous monitoring and evaluation of its functioning raises questions on its impact on the fair trial of the accused, it said. States also showed little desire to increase expenditure on prison, the report said.

Among the 16 states/UTs where the increase in prison expenditure was more, Bihar, Tamil Nadu, Jharkhand, and Uttar Pradesh were among the large and mid-sized states with populations over 10 million.

There should be an increase in the availability of justice services for reducing the present disparity in accessing justice that exists between rural and urban populations, the report suggested.

“The reports of 2019 and now 2020 make a significant contribution to laying the evidence base for policy makers and civil society to initiate early improvements for the benefit of us all,” said N Srinath, CEO of Tata Trusts. 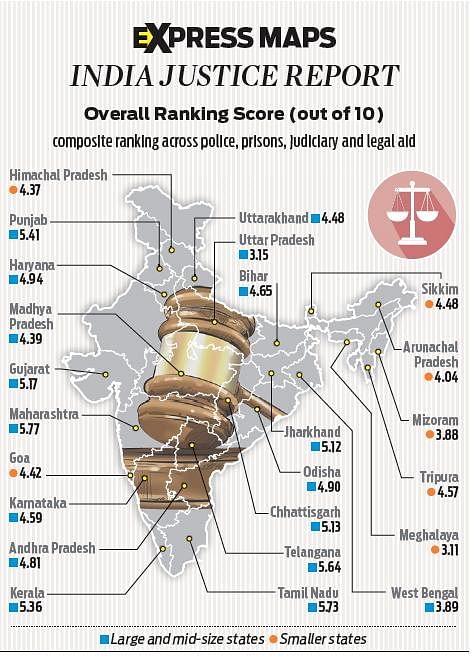