The draft bill also says that such persons will be ineligible for promotion in government services, can get only up to four ration cards and will be debarred from the benefit of welfare schemes.

LUCKNOW:  Just a day before World Population Day, a draft bill of the Uttar Pradesh Population (Control, Stabilisation and Welfare) Bill, 2021, has proposed that those having more than two children will not be eligible for state government jobs, cannot contest local body elections and will not be able to avail of government subsidies.

The draft bill also says that such persons will be ineligible for promotion in government services, can get only up to four ration cards and will be debarred from the benefit of government welfare schemes.
The bill has been drafted by the Uttar Pradesh Law Commission, which has invited suggestions from the public through e-mail at statelawcommission2018@gmail.com or by post latest by July 19.

The bill’s primary draft also proposes series of incentives for government servants as well as the general public, including two additional increments during the entire service, subsidy towards purchase of plots or house sites or built houses from the housing board or the development authority.

The other incentives include a soft loan for construction or purchasing a house on nominal rates of interest, rebate on charges for utilities such as water, electricity, house tax, maternity or as the case may be, paternity leave of 12 months with full salary and allowances. 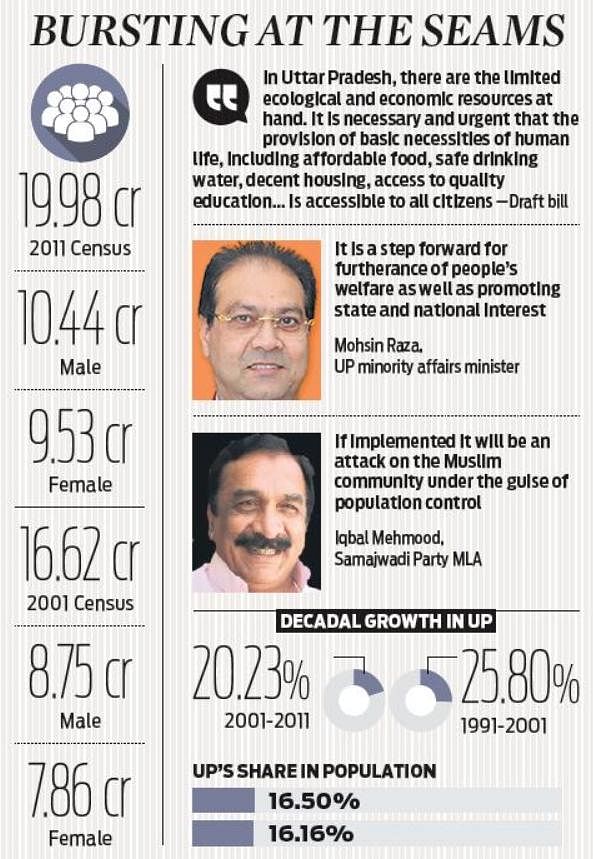 It also proposes a three per cent increase in the employer‘s contribution fund under the national pension scheme, free health care facility and insurance coverage to the spouse of those strictly following the two-child norm.

It also has additional benefits for public servants who have only one-child and undergo voluntary sterilization operation upon themselves or the spouse. The incentives include “two additional increments during the entire service, free health care facility and insurance coverage to the single child till the age of 20 years, preference to a single child in admission in all education institutions, including but not limited to the Indian Institute of Management, All-India Institute of Medical Science etc, free education up to graduation, scholarship for higher studies in case of a girl child and preference to single child in government jobs.”

While ruling out that the proposed population control law was aimed against any community, UP minister for minority welfare Mohsin Raza said “right now the first draft of the proposed law has been prepared for public suggestions on it by July 19. This draft after it becomes a law will go a long way in ensuring that all schemes, facilities and limited resources of the government reach one and all. It is a step forward for furtherance of people’s welfare as well as promoting state and national interest.”

But, even before the first draft of the proposed population control law was released, minority politicians, including Samajwadi Party MLA Iqbal Mehmood, had termed the proposed law as a conspiracy towards Muslims.  “If implemented, it will be an attack on the Muslim community under the guise of population control,” he said.