Clean Ganga crematoriums could have offered dignity to the dead

Last month, bodies of suspected Covid-19 patients were found floating in the Ganga. The decomposed bodies were first found in Bihar’s Buxar but later more were discovered in UP districts also.

NEW DELHI: Hundreds of Covid-19 victims whose bodies were thrown into the river Ganga or were buried in the river banks could have got a dignified final farewell if only the National Mission for Clean Ganga (NMCG) had finished constructing crematoriums along the serpentine river in time.

The NMCG was sanctioned to construct 33 ghats and crematoriums at a cost of Rs 833 crore in Bihar and UP under the Centre’s ambitious Namami Gange Programme. A majority of these projects were sanctioned between 2016 and 2019 with a target to complete them by March 2021. But an analysis of the progress data available with the NMCG shows that just over 51 per cent of the projects have been completed.

In the rest, work is either still in progress or tenders are being floated for identifying the contractors. Of the 33 projects, 17 have been completed, 13 are under progress, two are in the tendering stage while one is yet to be tendered. Eighteen of the ghats and crematoriums are in UP and 15 in Bihar. Last month, bodies of suspected Covid patients were found floating in the Ganga.

The decomposed bodies were first found in Bihar’s Buxar but later more were discovered in UP districts also. Although an inquiry is still under way to ascertain the cause, it is suspected that the existing crematoriums in Bihar and UP could not take the load of the pandemic victims and the bodies had to be thrown into the river. 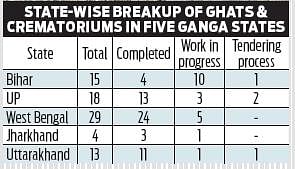 Days after the bodies washed ashore, hundreds of bodies were found loosely buried in the river banks in Unnao and Badohi districts of UP, begging the question that had the ghats and crematoriums been completed, would the suspected Covid victims be insulted in death. The bodies were found in six districts of UP Mirzapur, Kanpur, Prayagraj, Varanasi, Ballia and Ghazipur and three of Bihar: Buxar, Saran and Patna.

UP lags in crematorium construction

An analysis of the crematorium work in these districts shows that the project has been completed in Kanpur and Prayagraj under the Namami Gange programme. H owever, the construction work is still going on in Mirzapur, Varanasi and Patna. The crematoriums in Buxar, Saran, Ghazipur and Ballia do not come under the central scheme.

The status report of the ghats and crematoriums in these two states, particularly Bihar, is appalling. The official data shows that it is nil in Gopalgunj, 41% in Sultanganj and Danapur, and 53% in Vaishali. The other three Ganga states – West Bengal, Jharkhand and Uttarakhand – have fared better than Uttar Pradesh and Bihar. West Bengal has completed 24 of the 29 sanctioned projects, Uttarakhand has finished 11 of the 13 while Jharkhand has completed three of the four projects.

Following a national and international outrage over the recent incidents of mass burials on the river banks and floating bodies, the secretary in the Ministry of Jal Shakti, Pankaj Kumar, chaired a review meeting of the sanctioned projects. Uttar Pradesh and Bihar have been asked to submit an audit report on the utilisation of funds.

National Mission for Clean Ganga executive director Ashok Singh has also undertaken a review on the ground of the crematoriums constructed under Namami Gange and the overall management. During the review meeting, Anurag Srivastava, principal secretary, Namami Gange, in the Uttar Pradesh government, claimed that 13 crematoriums built in the state under the programme and those constructed out of state resources were functional and were being optimally utilised.

Now we are on Telegram too. Follow us for updates
TAGS
Covid 19 in India Clean Ganga Initiative COVID 9 Deaths in India