Misuse of donations of devotees is insult to faith: Priyanka Gandhi on alleged Ayodhya land scam

The Congress on Sunday alleged that scams are happening by taking donations in the name of Lord Ram after two opposition leaders accused Champat Rai of buying a piece of land at an inflated price.

NEW DELHI: Amid charges of corruption in the land purchased by the Ram Janmabhoomi Trust in Ayodhya, Congress general secretary Priyanka Gandhi Vadra on Monday said misuse of donations by devotees is a sin and an insult to their faith.

"Crores of people made their offerings at the feet of God out of their faith and devotion. Misuse of those donations is unrighteous and is a sin and an insult to their faith," she said in a tweet in Hindi.

The Congress on Sunday alleged that scams are happening by taking donations in the name of Lord Ram after two opposition leaders accused Shriram Janmabhoomi Teerth Kshetra Trust general secretary Champat Rai of buying a piece of land at an inflated price for the Ram temple premises.

The allegation that the land worth Rs 2 crore was brought at an inflated price of Rs 18.5 crore was made by AAP's Rajya Sabha member Sanjay Singh and a former minister in the Samajwadi Party government, Pawan Pandey.

The allegation was strongly refuted by Rai. Tagging a tweet on Rai refuting the allegation, Congress' chief spokesperson Randeep Surjewala had said on Sunday, "Lord Ram, what kind of days are these? Scams are happening by taking donations in your name. Shameless robbers are intoxicated with arrogance like Ravana and are selling faith." 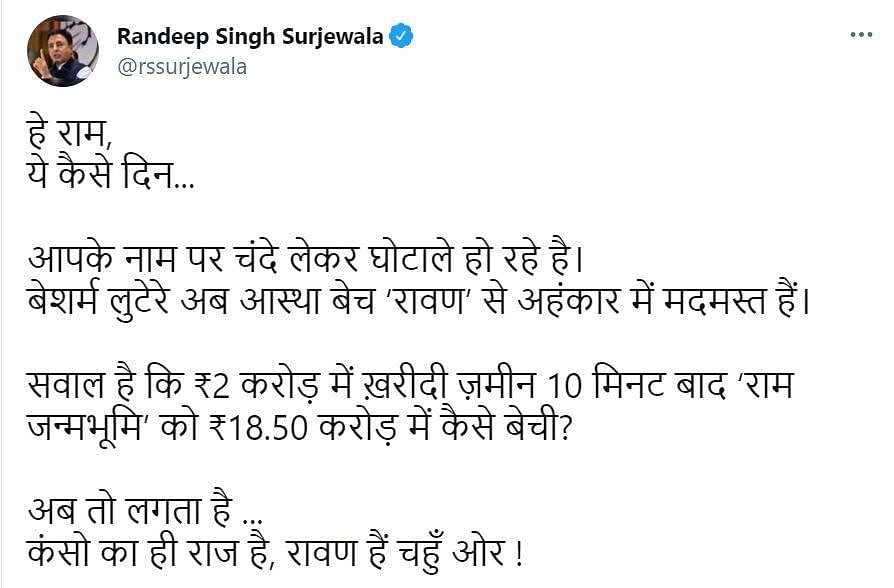 "The question is how the land bought for Rs 2 crore was sold after 10 minutes to 'Ram Janmabhoomi' for Rs 18.50 crores?" he asked. "Now it seems - Kans are ruling, Ravana is everywhere!" Surjewala had said in a tweet in Hindi.

Terming it a case of money laundering, Singh and Pandey had sought a probe by the Central Bureau of Investigation and the Enforcement Directorate.