CHANDIGARH: With less than a year left for the assembly polls and amid the ongoing farmers’ protest against new farm laws, the Congress-led Punjab government has decided to loosen its purse strings in times of spiraling state debt for the time-tested populist loan waivers.

There’s more for women and students of government colleges: they will be allowed free travel in state transport-run buses.

The state government will create 48,989 posts in state government to be filled in the first phase against 1 lakh vacancies. It has decided to raise the old age pension from Rs 750 per month to Rs 1,500.

The state budget has an outlay of Rs 1,68,015 crore for the financial year 2021-22. The state’s debt has risen to Rs 2,73,730 crore with the debt-to-GSDP ratio reaching an unprecedented 45.05. Manpreet announced the loan waiver, saying a debt amounting to Rs 4,624 crore has already been waived.

Also under Krishi Vikas Yojna, an allocation of Rs 200 crore has been set aside for 2021-22 for ensuring more inclusive and integrated development of agriculture and allied services.

The social sector expenditure has been increased from Rs 2,320 crore to Rs 4,000 crore.After presenting the budget, Manpreet said he would not be the next Finance Minister if the Congress returns to power in the 2022 polls.

Chief Minister Amarinder Singh in a lighter vein said that would be decided by the party, not him.

Meanwhile, Assembly Speaker Rana K P Singh revoked the suspension of 10 SAD legislators who were suspended for disrupting the proceedings of the House.

He made this announcement after Akali MLA Lakhbir Singh Lodhinangal raised the issue of suspension when Manpreet Singh Badal was about to present his budget proposals. 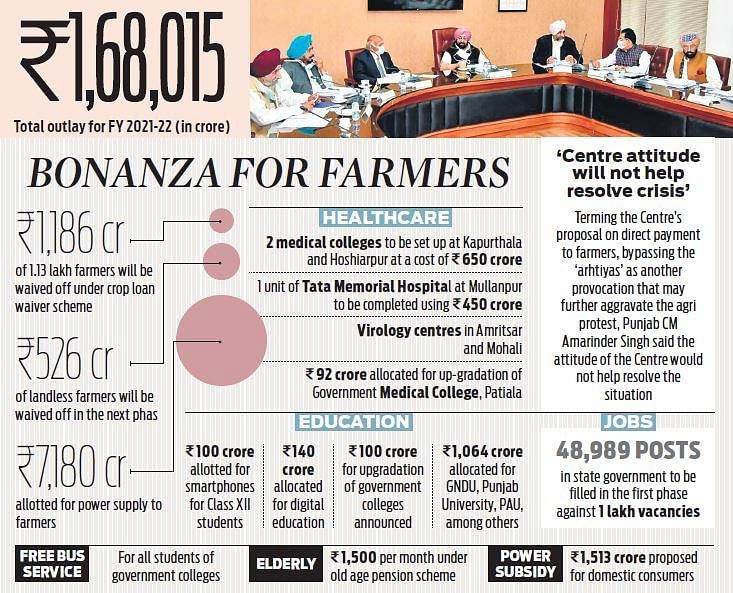 Now we are on Telegram too. Follow us for updates
TAGS
Punjab Budget Farmers Protests