Punjab reported 38 deaths and has the highest case fatality ratio of 3.4 per cent among all states, against the national average of 1.4 per cent.

NEW DELHI:  With COVID-19 numbers are rising in India, daily deaths have shot up too. In just a week, the average daily fatality count has jumped by an alarming 47 per cent.

On Friday, the country registered nearly 40,000 fresh cases in a 24-hour period and also recorded 188 deaths, with Maharashtra reporting the highest 70 fatalities.

Punjab reported 38 deaths and has the highest case fatality ratio of 3.4 per cent among all states, against the national average of 1.4 per cent.

Overall, India reported 1,112 deaths due to COVID-19 during March 12-19 whereas 758 deaths had been reported in the previous week.

Even though many states are struggling to bring the CFR to below 1 per cent as instructed by the Centre, doctors in cities currently witnessing fresh spikes seem more confident than last year.

"It's true that ICUs are getting filled up again, but we are better placed to handle the situation. Even though there may not be a sure-shot remedy for severe cases, we at least know what mostly works and at what stage. For example, we now know when to start using oxygen supplementation," said Nupur Gangwani, intensivist in a government hospital in Nagpur.

Raymond Savio, a critical care specialist in Chennai, another city facing the signs of a second wave, said doctors are better equipped with enough data on medical management and experience.

"Perhaps this is helping many centres, small as well as peripheral units, to treat patients early and confidently," he said.

ALSO READ: We can win COVID battle at homes, not in hospitals

A few others, however, conceded that things could change drastically if hospitals start getting flooded again.

"The lack of infrastructure remains a concern everywhere and if more and more people start showing up with severe symptoms, it might turn into a major challenge," said a government hospital doctor in Delhi.

Some public health experts stressed the need of tracking the differences in clinical severity of patients, particularly due to the concerns that a variant SARS CoV-2 might be the reason behind the resurgence.

"I doubt we are doing this, but data from Brazil is showing this trend," said Oommen John from the George Institute of Public Health in Delhi.

In Brazil, new infections caused by a mutant strain are causing severe disease in a higher number of younger people and the death rates have also increased. 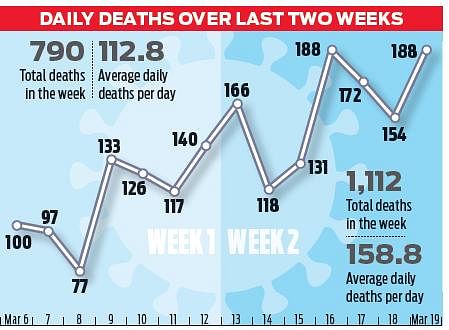