By May 2020, around 200 projects were considered and some panel members remarked that the time given to them to scrutinise the projects was less than adequate.

NEW DELHI:  When the country was locked down last year, the environment ministry’s expert appraisal committee (EAC) worked overtime to consider infrastructure projects. It deliberated on 837 proposals for approval, the highest in three years.

According to data collated by the Ministry of Environment, Forests and Climate Change (MoEFCC), the committee considered 837 project proposals in 2020 and approved 439. One was rejected. The maximum projects approved were in Gujarat, followed by Delhi and Maharashtra.

Keeping in view the pandemic, EAC meetings were held virtually from last April. By May, around 200 projects were considered and some panel members remarked that the time given to them to scrutinise the projects was less than adequate.

In April, the EAC on infrastructure cleared the proposal for construction of the new Parliament building. New terms of reference for the Centre’s ambitious Rs 13,450 crore Central Vista project were approved last year. Also approved were several policy decisions to expedite project clearances.

The EAC in mining, infrastructure, thermal power, hydroelectric and projects in coastal regulation zones had considered 822 and 798 projects in 2019 and 2018. It approved 466 and 436, while three and nine were rejected in those years, respectively.

In 2020, the ministry had issued a directive mandating the EAC to meet “at least twice every month to cut down the time for environment clearances”.

The ministry said approval of projects continues to be on the basis of appraisal of documents (Environment Impact Assessment and Environment Management Plan reports) and that documents are prepared by the project proponents on the basis of professional advice, baseline information collected during field study and public consultation.

It further said the project proponents are required to submit all the requisite clarification/explanation before approval.

Environmental experts have questioned the ministry over the appointment of EAC members in certain sectors in 2020, as some members either had conflict of interest or didn’t have enough expertise. 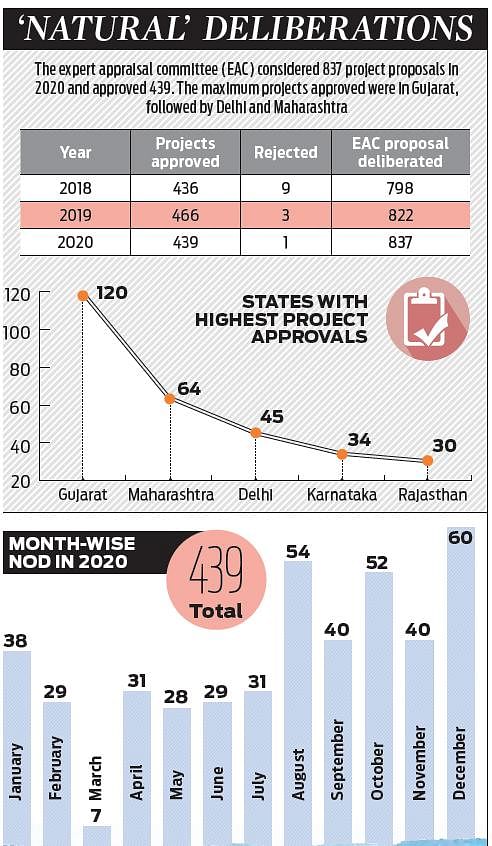 Now we are on Telegram too. Follow us for updates
TAGS
Expert Appraisal Committee Ministry of Environment Forests and Climate Change