Arundhati Chaudhary is an established name in the international boxing arena.

Rajasthan pugilist raring to clinch Olympic medal
Arundhati Chaudhary is an established name in the international boxing arena. This pugilist’s exploits in the ring, both in the country and abroad, have now earned her an Olympic berth. What this means is now she would be able to sweat it out with the best and learn from her seniors at the National Camp in Pune’s Army Sports Institute for next two months. Talk about sharpening skills with the best to teach you a trick or two. Arundhati had recently made history by becoming the first woman from Rajasthan to claim a world championship title in boxing after winning gold in the 69 kg final at the AIBA Youth World Boxing Championships in Poland. Arundhati has so far won over 20 medals for the country at the international level. Her big dream now is to bring a medal for the country from the Olympics. 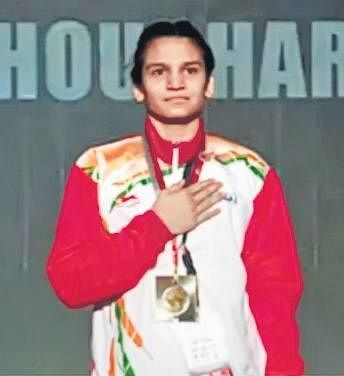 This doctor’s success story is one for the ages
Women empowerment in Jaisalmer got a booster shot when Priyanka Kanwar became the first woman doctor in Pokhran Assembly segment. The arid region, tied to age-old practices, is backward in terms of women’s education. As a daughter-in-law in Sankra village, Priyanka, too, had to compulsorily wear a veil, but it did not stop her from pursuing medicine. And when she was awarded the MBBS degree, the entire village danced for joy. Priyanka’s husband Derawar Singh is an administrative officer in Jaisalmer. Priyanka said it was her childhood dream to become a doctor. She credited her father-in-law for encouraging her to come out of the ‘ghoonghat’ and continue her education. Her success story is sure to inspire the next crop of wannabe achievers to discard mindless tradition.

Decorated army man’s body donated for med research by family
Even in death, Jaipur’s brave soldier lives on. The family of Shaurya Chakra awardee Lieutenant Colonel Ratan Kumar Sen donated his body for medical research after his passing away in Jaipur last week. The decision was taken by his wife and two daughters. Lieutenant Colonel Sen was awarded the Shaurya Chakra in 1995 for his gallantry in counter-insurgency operations in Kashmir. His wife, a retired teacher, said: “He was a soldier who dedicated his life for the country. We decided to donate his body so that he could be useful for the country.”

Pregnant doctor puts duty before self
When the fight against Covid-19 is won, it would be the frontline warriors like Dr Pragya Gautam, whose efforts would prove decisive. Eight months into pregnancy, the in-charge of Talwandi Dispensary in Kota, Pragya, continues discharging her duties. From attending to patients at OPD to managing vaccinations and door-to-door survey, Pragya is at the forefront. While she could have availed of maternity leave, Pragya chose not to. She had contracted the infection September last and needed oxygen support.